A mystery USB leads Adrian to a cabin where he finds a book written by himself. The book contains schematics for a machine. Adrian, being good with his hands, starts to build.

Adrian receives a second USB. It contains video proof that his wife, Candice, is having an affair. Distraught, Adrian returns to the cabin. The television inside turns on, reveals Other Adrian. Other Adrian explains he is from a parallel world. His life’s work is locating other versions of himself, bringing them across to his world where they share knowledge and unlock the mysteries of the universe. Other Adrian needs Adrian to build the machine to bring him across.

Later, Adrian receives an email from Other Adrian’s agent asking to meet. 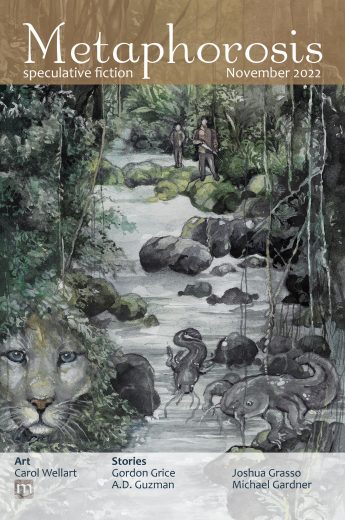 He’s chosen one of the coffee places in the city that Candice talks about.
Read it "Infinite Possibilities III – Michael Gardner"
An Hour in the City of Lightning – A.D. Guzman

An Hour in the City of Lightning – A.D. Guzman

The match flared orange and momentarily suffused crisp December air with an oddly soothing aroma of sulfur and smoke.
Read it "An Hour in the City of Lightning – A.D. Guzman"
Bas Relief – Joshua Grasso

Sveta twisted and turned in the mirror, lifting her shirt to inspect her stomach, flattering herself that it looked harder, firmer, than it had last week.
Read it "Bas Relief – Joshua Grasso"
If Gold Runs Red – Gordon Grice

“Thirteen’s too old to be scared of a rock,” Clay’s dad smirked, even though Clay hadn’t said he was scared.
Read it "If Gold Runs Red – Gordon Grice"
December 2022 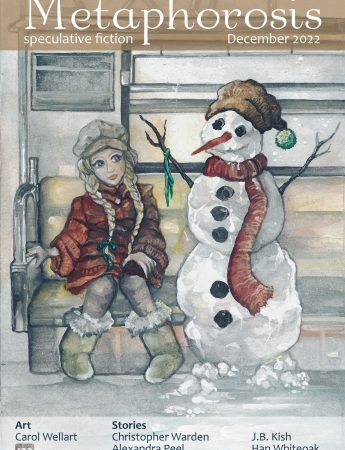 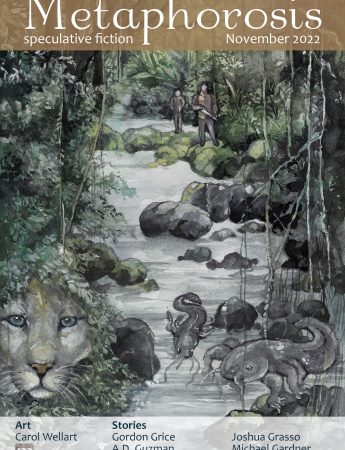 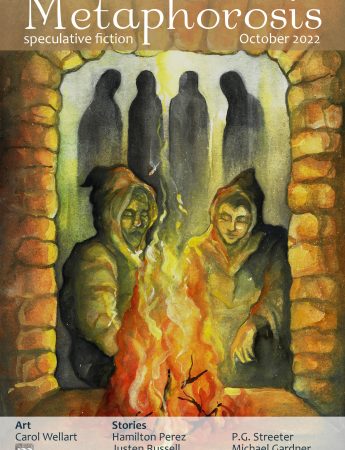 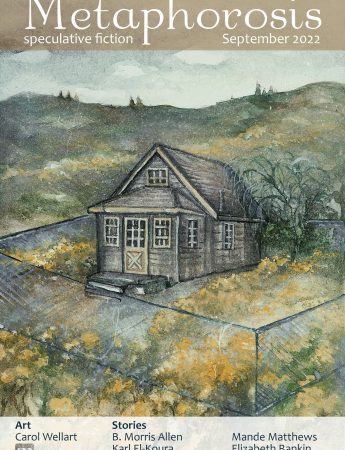 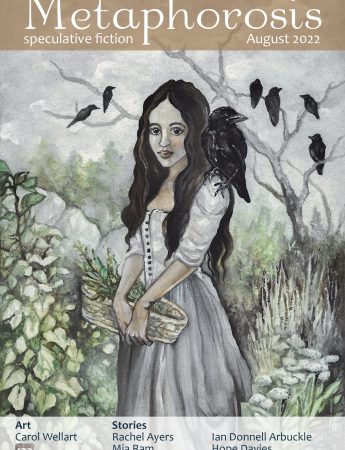 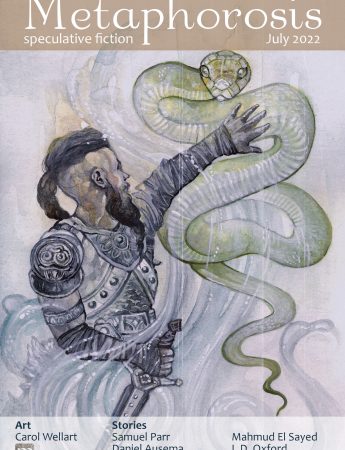 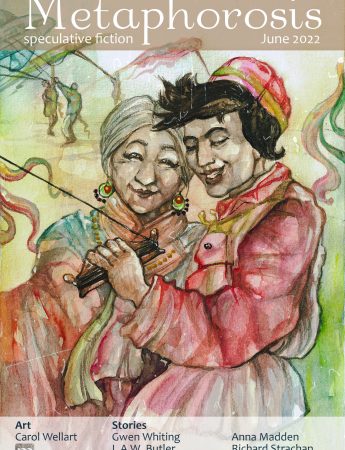 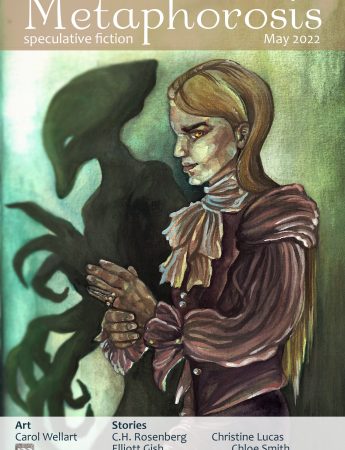 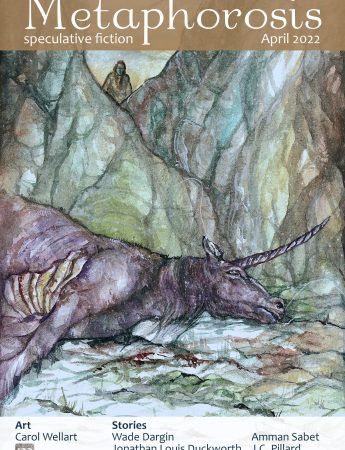 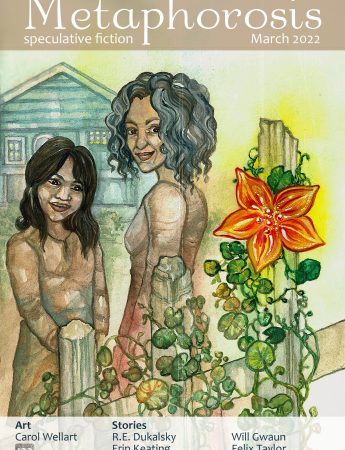 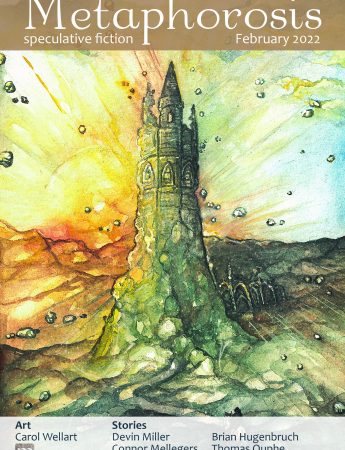 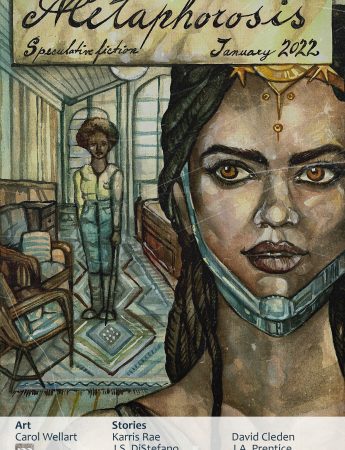 Chloe Smith’s story “Midnight’s Second Station” was published in Metaphorosis on Friday, 27 May 2022. This story owes its existence to Entangled Life by Merlin Sheldrake, the nonfiction book that launched a thousand spec fic stories—or at least one by every genre writer I know who’s read it. Seriously, though, it’s a mind-opening book, which is completely appropriate, given that it’s all about fungi. I knew I wanted to write a “mushroom story”, but I …

Q: Do you have a garden? Have you ever grown your own food?

A: My wife is a hobbit of a woman. She spends most of her free time in our garden. While I’ve dabbled with a vegetable or two, she’s got the green thumb in our family. During the summer, we spend a lot of time outside. I’m usually focused on a woodworking project while she’s digging around in the dirt somewhere.

Alexandra is a visual artist turned author. She has a degree in Fine Art: Sculpture. She has been a freelance artist, community artist, graphics tutor and bookseller. She currently works as a Learning Support practitioner in a F.E/H.E college. She hails from the sunny island of Britain!

He’s chosen one of the coffee places in the city that Candice talks about.

Elliott Gish’s story “From a Mother to Her Daughter, on the Eve of Her Wedding” was published in Metaphorosis on Friday, 20 May 2022. While reading a book about Victorian social and sexual mores as research for another project, I began to think of how uninformed young women in that period were, even on their wedding nights. In such a repressed and sexually anxious society, much of the information a young woman brought with her …

A: I would love to write a heist story. I think this goes back to my childhood dream of being a cat burglar. Nailing down all the details has discouraged me from pursuing it.