B. Morris Allen’s story “Chambers of the Heart” was published in Metaphorosis on Friday, 24 February 2017. 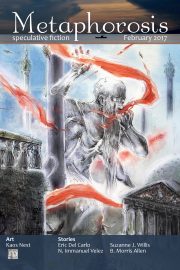 I have a very minor heart condition. Confirming its nature required a day wearing a heart monitor, which naturally had me thinking about the heart and its chambers. I wondered what life in those chambers might be like if they were neither biological nor purely metaphorical, but actual physical places. The opening line came quickly after that, and with just a little tweaking to decide on seasons and views, the main elements were in place. Because the heart is an actual building, there are of course other, more minor passageways. The building, of course, reflects its master’s mood – it’s a hard climb to Ecstasy, and a quick slide down to Despair. I soon had the idea that the master inhabits the rooms, but that he never clearly interacts with his servants, and that his dialogue with his principal servant could just as well be a monologue.

It’s a somewhat odd piece, but I had fun with it, and it emerged fairly quickly. I liked the ending’s focus on fulfillment rather than the master’s constant, fruitless chase of ecstasy.