Daniel Roy’s story “Forever and a Life” was published in Metaphorosis on Friday, 12 April 2019. 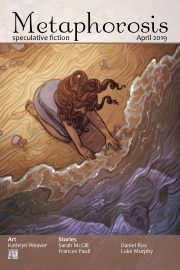 One of the paradoxes of aging is that the less life we have left ahead of us, the more we obsess about extending this time. Death-defying acts of rebellion have almost always been led by the young, after all. It led to me wonder: how fearful of death could someone be if they could theoretically live forever? What would they be willing to sacrifice in exchange for eternity? And what would rebellion look like in such a world?

A few years ago, I stumbled upon a story about youth in 1980s Cuba who willingly injected themselves with HIV to protest their treatment under Castro. I had found the perfect allegory for the struggle between self-preservation and the creative destruction of rebellion. What’s more “punk rock” than kicking eternity in the teeth? What kind of people could willingly walk away from life itself? What could they possibly hope to accomplish by doing so?

This story felt perfect for an oral history format, as I wanted to tell the story of Sylvia Castro in her full contradictions. I didn’t seek to cast a crude light on her psyche as much as explore the shadows she cast across the rest of the world. This was not a big story about wars and revolutions: I wanted to tell the story of one meaningful life, and the ripples that life could cast across society.

As I explored this vision of Sylvia through my writing, I was struck by how much it paralleled the plight of many of the people I know who are transgender, and how they have to fight for the utmost basic right to even exist. Sylvia already lived in my mind as a fully-formed character at this point, so I felt confident I could write her as a full-fledged character that happened to be trans. And so, with humble apologies to my trans brothers and sisters, I borrowed some of their courage and their unflinching sense of self in the face of adversity to lend it to Sylvia as she struggled for a life well lived.