Phoenix Alexander’s story “One for the Wounded” was published in Metaphorosis on Friday, 10 May 2019. 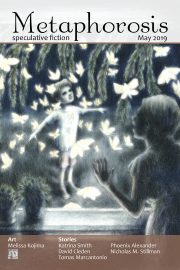 I was visiting family in Cyprus in the summer of 2018 and reading Alexander Chee’s The Queen of the Night in the lazy, languid, 110-degree days. The sensory richness of the novel – the heightened emotion and drama of the narrative, the piled-on details of cloth and scent and stone – inspired me to try to write something similarly decadent.

At the same time, I had the notion to write about one of my greatest fears: the idea of wasting the time of one’s life, of somnambulating through the days and years uncritically and leaving one’s dreams and ambitions unfulfilled – and the realization of that waste that comes too late. This fear would be embodied by a protagonist who was kind of temporally stunted, and one who defined himself by his trauma. This aspect of the story was inspired by a particularly sad and troubled former room-mate of mine, who took all positivity and aid and comfort and sympathy and swallowed it like a black hole and, still, asked for more.

I wanted to process that as sympathetically as I could, and an important part of that process was dealing with the often impoverished models of love queer people ‘inherit’ or are normalized in. Finally, I wanted the Marchesa’s character to represent the women whose time is wasted in the wake of gay men’s affairs. Again, the challenge was to do all this with sympathy, and compassion, and something like hope: an anti-tragic-queer narrative. As difficult as it was for me to write, with “One for the Wounded” I aimed to turn the dross and banality of heartbreak into something beautiful.