Carly Racklin’s story “The Guardian of Werifest Park” was published in Metaphorosis on Friday, 27 September 2019. 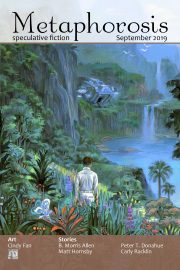 “The Guardian of Werifest Park” might be my oldest and most revised story. A long time ago I had a dream in which a girl beckoned a giant shadowy creature out from a line of trees, fearsome to others but to her, a friend. I’ve always been fond of the idea of “forest spirits” or magical creatures that inhabit trees and organic things, and this story grew out of those two concepts. Almost all my stories involve forests in some way.

I fiddled with the idea for a long time, never making anything substantial of it, though never quite abandoning it either. Then, in college, with illuminating feedback from my peers and professors, I wrote the story as my senior manuscript. It went through several more transformations in the following years before it found its final home here.

In the very first draft I ever wrote of it, the story was set a rural town next to a large stretch of woods, and not a city. I like to imagine that this town is where Inez is headed at the end of the story now. Just as she starts and ends in the same place, the journey of the larger story also ends where it first began.