Christine Lucas’s story “Via Dolorosa” was published in Metaphorosis on Friday, 8 November 2019. 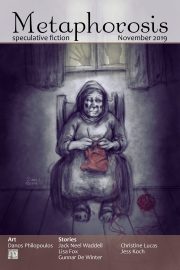 “Via Dolorosa” is a story in a series of stories dealing with the Unseen. In my worldview, the Unseen includes elements from the speculatively obvious, that most people cannot see (ghosts, undead, mythic creatures) along with everything a lot of people choose not to see, like abuse.

It also draws a lot from personal experience, from growing up in a household with a Greek small-town mindset, much like the one described in the story. It took me close to four decades and the rise of the Internet to finally accept that it’s not okay for a parent to hit their child with their cane or their leather belt, it’s not okay to be catcalled or groped at thirteen years old for wearing shorts during an August heatwave, it’s never okay to blame the victim, and it’s never okay to remain silent when speaking up might change a life.

And last but not least, another point of inspiration for this story (and the others like it) is how the Old Ways were never fully eradicated, despite the efforts of the Christian Church. Their echoes remain in many aspects of everyday life, from common sayings to holidays customs to funerary rites, and mingle with the new ways to create something bigger than both.