David A. Hewitt’s story “Donald Q. Haute, Gentleman Inquisitator, and the Peril of the Pythogator” was published in Metaphorosis on Friday, 24 April 2020. 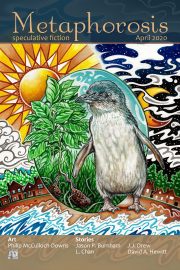 Pinning down a story’s origins is (for me, anyway) a dicey proposition. As best I can recall, this Donald Q. Haute story had multiple inspirations. This is actually my second story featuring Haute, who is of course a weird modern analogue to Don Quixote (with humblest apologies to the ghost of Cervantes for even pretending to attempt such a thing). A good friend works in South Florida as a marine biologist, and I once accompanied him on a sampling expedition in the coastal mangrove forests. Then there were the invasive pythons, which are apparently everywhere in the Everglades now, but which nobody seems able to find when they go looking. Then there was the social media three-thousand-ring circus that surrounds us all, and the impact that has on journalism, on facts, and on genuine connection with our fellow human beings. And then somehow Frankenstein’s big, bad, grandiloquent creature and his latter-day Replicant offshoot crept into the mix as well. Plunk all these ingredients into a pot, let simmer for 3 – 14 months over low heat, stir well with revision and generous editorial aid, wait till timer says “BING!”, and the result is “Donald Q. Haute, Gentleman Inquisitator, and the Peril of the Pythogator.”