Evan James Sheldon’s story “There is a City, He Told Me” was published in Metaphorosis on Friday, 30 August 2019. 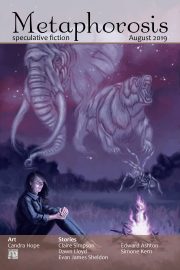 I wrote, “There is a City, He told me,” after reading Calvino’s Invisible Cities. In that short novel, Marco Polo describes the Kahn’s empire to him through a series of flash-length sections. Reading, you come to realize that Marco Polo is actually talking about something else, and in the end (Spoilers!) a descent into hell. Instead of making a broad philosophical statement, I wanted to show how this form could function on a smaller, relational level. When I was writing this my wife and I were expecting our first child, a girl, and it seemed like a natural fit.