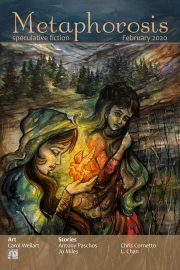 When I was in college, my good friend was the caretaker for a portion of her family’s heirloom sourdough starter. It blew my mind that this starter had been passed down through multiple generations of her family, and I loved the idea of a living, growing family heirloom. (That you could turn it into delicious bread, even better.)

Passing down a sourdough starter isn’t uncommon. There are documented cases of starters that are more than a century old, and some families claim theirs has been passed down since the Gold Rush, when miners often kept their sourdough starter in a bag around their neck so it would stay warm. There’s a sort of magic in that already, and it was a small leap to imagine a sourdough starter with a mind of its own.

The story became about more than that, though: it’s about hereditary privilege, about found family, and about being true to yourself. In fantasy, magic is often reserved for the privileged, forbidden to the people who need it most. It’s also often limited by gender: either magic is forbidden to women, or it’s a special, secret knowledge that only women can access. But what about people who aren’t men or women? What about people who are both, or in-between, or neither? And why should magic only be used to help the people who already have everything they need?

Chris is an outsider in their own world in a number of ways. Their recognition of their privilege and their commitment to doing good is one of them. Their identity as a non-binary person is another, and their experience of finding their own path is drawn from aspects of my discovery of my own gender identity (though I’m grateful to have very supportive friends and family, unlike Chris’s grandmother). I wanted Chris to get their own magic, and to show that while society might fuss over those artificial dividing lines, the magic itself doesn’t give a damn.