Josh Taylor’s story “The Offshore” was published in Metaphorosis on Friday, 26 July 2019. 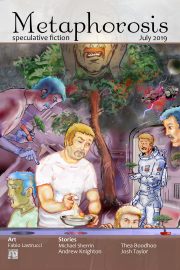 I recently read the book The Hidden Wealth of Nations: The Scourge of Tax Havens by Gabriel Zucman, which I recommend to anyone interested in the topic. People evade taxes by putting their money in other countries with lower tax rates. Anonymous bank accounts and shell companies make it possible to do it in a way that looks legal.

So what if anonymous bank accounts and shell companies were no longer an option? I suppose that would reduce tax evasion. But tax evasion strikes me as something with whack-a-mole qualities—get rid of one form and another pops up. For example, a person living in a place with low taxes could store someone else’s money in their own bank account. And if someone who was wealthy and powerful wanted to store their money this way, in a person, they’d probably take some steps to ensure that person’s cooperation.

That was the starting point. I thought it would lead to a relatively short short story. But other elements found their way in, particularly the year of research I did before buying my first non-IKEA dresser, and some longing for warmer weather, and it turned into the longest story I’ve written.