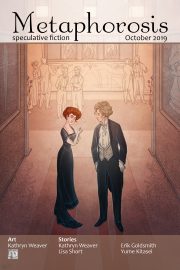 “Darling” is part of a sprawling, shared-world/co-writing project that my wife Emily and I have been developing for a number of years. The Child in the House, as we call it – after Walter Pater’s Imaginary Portraits – is a series of stories about two generations of magicians and mediums. “Slip Stitch” – from the October 2019 issue of Timeworn Lit – also belongs to this world.

This particular story derives from a wealth of personal experience: like Nick Darling, I’m a gay, mentally ill artist. I’ve bumbled through plenty of awkward gallery openings, and I’ve excreted plenty of awful oil paintings that got “accidentally” left in the studio, never to be seen again. I hope I’ve included a lot of details that visual artists can relate to; for instance, even painting digitally, I use the same two brushes for everything.

For the record: I deeply, truly do not recommend using oil paints in your poorly-ventilated early 20th century apartment building, especially if it was built to keep heat inside.

Speaking of the late 19th and early 20th centuries – it was a fascinating time for art and illustration, and, as you might expect, hugely influential on my own work. The Aesthetic and Decadent movements, the Symbolists, Art Nouveau, Arts and Crafts, Cubism – and, of course, the Vienna Secessionists. I’d encourage curious folks to look up not only Gustav Klimt and Egon Schiele, but also Charles Rennie Mackintosh, Otto Wagner, Hilma af Klint, and Oskar Kokoschka. Art movements are more than just paintings and sculpture. They’re furniture and interior design, they’re architecture, they’re math, they’re philosophy. The deliberate synthesis is part of what attracts me to this period in particular; the other part is sheer visual appeal.

I’ve listed a lot of names here, I know, but I am an authorial and artistic magpie. I am a human Pinterest board. I collect and I synthesize for the #aesthetic. Even the Prince nod (Nick Darling, Darling Nikki) is intentional – I live in Minnesota, after all, but there’s a reason the Purple One is one of my wife’s and my creative touchstones.

I genuinely believe that art is actual, for real magic. Writing, music, painting, all of it. Art is magic!