L. Chan’s story “Sonata I: Sona” was published in Metaphorosis on Friday, 31 January 2020. 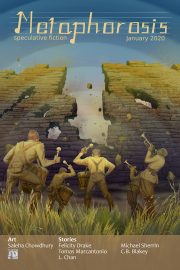 “Sonata” is one of the longest things that I’ve written (and completed). I don’t often work in the fantasy sandbox, I much prefer near future science fiction and contemporary fantasy. For “Sonata”, what preceded the story was the world building — a magic system that fell roughly as another aspect of the physical world, and where the control of that magic ran along political and societal faultlines rather than through resource or genealogical lines. Things flowed on from there — an extant Empire with a colonialist reach, a good old fashion revenge quest and some non-traditional characters. It didn’t get really steampunky until about halfway in, when I realised that the frame of having a sound based magic system would overcome a lot of the engineering limitations of steampunk without pushing the rest of the technology of the world into the industrial revolution or thereabouts. It was also important to me to retain a tight cast of characters this time round, although the roster is definitely going up if I ever return to these folks.