L’Erin Ogle’s story “The Girls Who Come Back Are Made of Metal and Glass” was published in Metaphorosis on Friday, 28 June 2019. 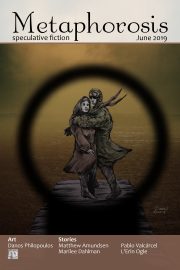 “The Girls Who Come Back Are Made of Metal And Glass” was really predicated on one idea—a doctor raising girls from the dead who had committed suicide to atone for his own failure as a father. The characters took on a life of their own, and it became much darker than originally anticipated. If you were to raise the sentient dead, where had they been in between? What kind of place? And what else might have been there, waiting to come back as well?

It ended up being about the girls more than the doctor, about a yearning to be free instead of restrained, and about the insidiousness of evil, making a home inside of lives wrecked by good intentions.

As the girls came back, they left something behind that was vital, and brought back something sinister. Trauma creates cracks in the belief structure the world is a good place. If they’re not healed, all kinds of things get in.

I was always rooting for the girls to gain freedom.