Lewis Gershom’s story “The Dybbuk” was published in Metaphorosis on Friday, 20 December 2019. 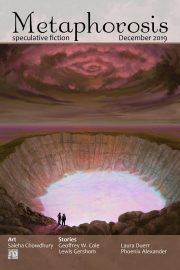 Early in 2019 I was spending time with some family members and I overheard a story about a friend-of-a-friend who, through somebody’s will, inherited a bunch of old belongings. This friend-of-a-friend assumed they were to receive something of sentimental value, or any value, but it actually turned out to be, literally, a massive pile of junk in an attic. It became this person’s unfortunate responsibility to clean out the attic.

The idea of a family inheritance turning out to be a major inconvenience intrigued me. I wondered what it would be like if I were to receive an inconvenient inheritance. What would that item be? In what way would that item be inconvenient? Drawing on family lore and this simple idea, I set out to write what could best be described as a Jewish ghost story. The protagonist of this story receives an item that reveals to him the source of his family’s idiosyncrasies and his position in the greater Jewish diaspora.