Matt Hornsby’s story “The Draining” was published in Metaphorosis on Friday, 20 March 2020. 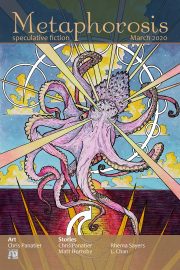 The story really came from a single, simple image – of a ship marooned on the ocean floor, with the ocean nowhere to be seen. It seemed like a powerful image of environmental catastrophe, and I added the idea of the ship being a hunting-ship, whose business is exploiting nature in the form of the ‘serpents’, to bring that element out. From there, the characters and the rest of the world just suggested themselves and developed iteratively. I’ve always been a fan of nautical narratives, and I enjoyed the process of creating salty sea-dog characters. In the end, what started as a very short story became a medium length one – the world and characters threw up a lot of questions, and I expanded the story considerably to try and answer them. Perhaps a shorter story would have been better, but I can never resist the world-building temptation.

The protagonist, Hardie, was initially quite a passive character, more of a viewpoint to narrate what happens aboard the ship than an actor himself. However, it quickly became clear that he was sitting awkwardly between the two positions, and decided to make him a fuller part of the story. I read back over some pre-twentieth century writing, particularly writing that features sailors, to try and get his voice right.

In any case, I hope people enjoy the story and take something away from it!