Nathaniel Williams’s story “The Record Collector” was published in Metaphorosis on Friday, 5 June 2020. 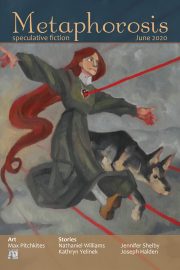 I went to college with a ton of Saint Louis folks and over the years heard many vignettes about the area. The stuff in my story about the Exorcist hospital and the Lake Chesterfield sinkhole is all true. Saint Louis is also the home of Beatle Bob, the nationally known music superfan who attends concerts almost nightly, always decked in vintage 60s gear. (If you played in an area band and Bob attended your show, it meant something.) There’s a little Beatle Bob in Roddy, even though the character ultimately asserted a more unique persona as I wrote him.

And, as a displaced Midwesterner, I miss the area. I’ve spent time recently thinking of all those Gen-Xers who lived around there in the early 2000s (many good friends and mentors) and the ups and downs they’ve seen since I moved away. That’s in there too.