Travis Wade Beaty’s story “Regret’s Relief” was published in Metaphorosis on Friday, 8 May 2020. 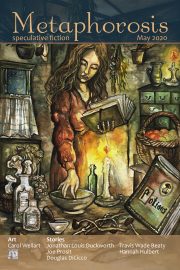 I started writing “Regret’s Relief” while visiting Paris and reading A Moveable Feast by Ernest Hemingway. The initial idea was to go to that Paris of Hemingway and Picasso and Gertrude Stein etc., but imagine the art they were trying to create was magic. I enjoyed delving into the idea of a frustrated spell-crafter, so the story I wrote originally was a lot about that. Eventually, as I revised the story, it became influenced by my own experiences of living in Los Angeles in my 20s and struggling to make a career out of acting.

Also, seasons were on my mind a great deal after having moved to Washington, DC after seven years in Los Angeles. I experienced the change of seasons growing up in Indiana, but LA was void of that passage from dead winter into vibrant spring. Experiencing that first spring in DC with all the cherry blossoms was quite a spiritual experience for me. So I was eager to put that feeling into a story.