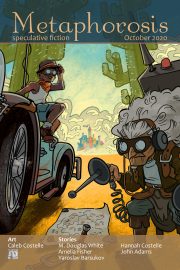 The first version of “Lingua Franca” bears little resemblance to the way it ended up. The concept I began with was, why does telepathy always involve language? If people could communicate mind-to-mind virtually from birth, directly sharing images and emotions and ideas, what use would there be for words? What does a society with communication but no language look like?

Having conceived of a society which communicated exclusively through mind-impressions, I figured I’d better introduce a non-telepathic character to explore it on the reader’s behalf. Thus the idea of the spoken word tutoring sessions arose, and a character balanced halfway between two worlds, trying to bridge them both.

The initial draft involved a sort of seduction in the opposite direction: Vaun wanted to introduce Far to the miracle that is human language, with all its quirks and miscommunications. Over the course of writing the story, I ended up reversing that. Since this telepathy was technological in origin, I figured there would be intense pressure on anyone who decided not to take the implant. Overall, “Lingua Franca” began as an exploration of language, and privacy, and two people from very different worlds attempting to form some kind of connection.

And then I hit the point that I always run into with my stories, where I go “but what if it was a horror story?” And thus, the more cultish elements emerged. I ultimately eased back from true horror, and settled on something that felt more authentic: the claustrophobia and joy that go hand-in-hand with any tight-knit community.

I realized at a certain point that my ruminations on language and privacy were really prodding at what it means to be human at all—is being an individual a requirement? Is shame? At the end of the day I feel like I picked up and turned over a lot of questions I can’t really answer, but I certainly enjoyed the asking.