Charles Schoenfeld’s story “The Preserved City” was published in Metaphorosis on Friday, 13 November 2020. 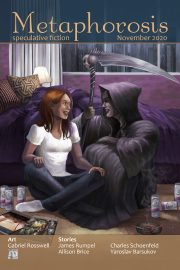 I used to work for the American branch of a company that had its global headquarters in Bergamo, Italy. Once, my job sent me to Bergamo for a week. I spent the daytime in an office, but in the evenings and on the weekend, I was free to explore the town. With the exception of Simona’s apartment, I visited each of the settings that later found their way into the story.

Either during that trip or shortly afterward, a single image came into my mind, and I knew I wanted to write a story around that image. I pictured two ghosts from Bergamo’s medieval past, standing by the city wall, looking out across the valley, across the modern portion of the city that had not yet existed in their own time, and having a conversation. I pictured them from the perspective of a modern person somewhere beneath the wall, looking upward, seeing the moon shine faintly through one of their translucent heads and realizing that they were ghosts. This living observer would naturally wonder what they were talking about. What did they think of the modern way of life? Were they proud, amazed, disappointed?

That exact image didn’t find its way into the finished story, though an echo of it did. Instead of two ghosts, it was a ghost and a living person. And the living person had a problem for which the city’s dual nature—past and present, side by side—served as a metaphor. I wrote the first draft of the story during the six-week Clarion writing workshop. It was my second story of the workshop, so maybe subconsciously I was feeling some of the same pressure as my protagonist, to make sure my second offering was at least as good as my first one.