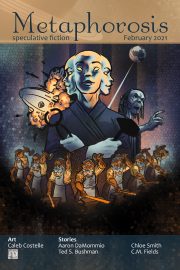 The title of this story is a terrible pun on Ursula Le Guin’s first novel, Rocannon’s World. The final product doesn’t share a lot with that piece of early SF, but I began by wanting to evoke some of the same sense of a lone explorer overawed by an alien landscape. As far as where the cetaliths came from, I’m always suspicious of SF that imagines alien life that is too similar to our own. I think that if we do ever discover sentient beings on other planets, it will be so different that we’ll have a hard time recognizing it as “people”—especially given that humans have a poor track record of even accomplishing so much when it comes to other groups of humans. I hope that the cetaliths are sufficiently strange and different to come across as truly alien. The bond between Adda and her daughter Cia emerged as central to the story only as I started working through my drafts. I needed someone for Adda to interact with, and once her daughter came to visit, their relationship emerged naturally as they talked together. Then I realized that Adda’s own difficulties communicating—with Cia, and with other people who don’t believe the cetaliths are worth understanding—could connect with her scientific discoveries and help the story say something about communication in general. That description sounds like the story evolved in a straightforward way, which is hardly the case. It went through a ton of drafts, and I’m very grateful to the friends and beta readers, and to the Metaphorosis editorial process, which helped me carve “Rock-Adda’s World” into the right shape.