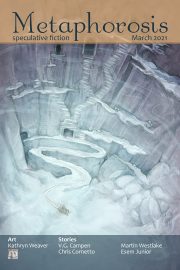 One reason I write short stories is to flesh out the world of the novels I one day hope to publish. “Sanctuary” began as an exploration of certain characters’ roots (Abby’s child among them), but it quickly became a philosophical exercise.

To write this story, I had to consider how a totalitarian society controls its citizens. There are certain obvious techniques we see applied in countries that shall remain nameless: stripping citizens of identity, rewarding them for informing on each other, and forcing them to compete for the goodwill of the ruling class, just to name a few. It also doesn’t hurt to have a caste of good, old-fashioned enforcers.

The true key to subjugating a population, however, lies in controlling the flow of information. It isn’t fear of the Seekers that keeps Abby in Sanctuary, but her faith in the Patriarch’s lies. Without an outside perspective, she lacks the means to question her society — until Martina’s arrival causes cracks in her worldview. Only by having the courage to allow that her truth might not be the truth does Abby win her freedom.

For us as well as Abby, perspective is essential to freedom. When we allow others to curate our access to information, we surrender that freedom.