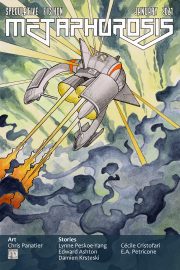 “Unifiers” began with a single line: “Doran?” Michaela says. “I don’t like you. I want you to know that.” For a long time that’s all it was, one obscure line of dialogue in my Ideas folder—but I kept coming back to it, and eventually I realized that this was not a couple on the verge of divorce, or two office workers forced to share a cubicle. I was deep into the plotting of a novel at the time, and because that was taking up ninety percent of my head space then, I decided to drop these two unhappy coworkers into that book’s universe.

The Union as I’ve conceived it there is a mostly malign social structure, but it’s filled with a mix of people who range from good to bad to indifferent. I wanted this story to show a conflict between two people on opposite ends of that spectrum, with the fate of a living world at stake. All I needed at that point to fill in the story were a backdrop and an ending. Those I borrowed from a story I wrote years ago that never quite worked on its own. The bits I pulled from it, though—the colonists, and the final scene—I thought were deserving of a second chance at life. At the end of the day, I was very happy with the way these pieces came together. I very much hope that you are as well.