Elise Kim’s story “The Three Thousand” was published in Metaphorosis on Friday, 11 December 2020. 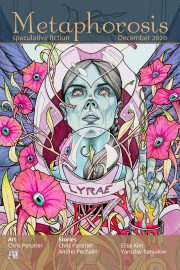 I was reading Herodotus’ Histories one summer when I found the initial inspiration for “The Three Thousand”. Herodotus is a great author to consult for ideas. I like to imagine him as an intrepid but easily distracted explorer, more focused on what would make a good story than what is actually factual history. He writes this of the religious beliefs of the ancient Egyptians: “[they are] the first who reported the doctrine that the soul of man is immortal, and that when the body dies, the soul enters into another creature which chances then to be coming to the birth, and when it has gone the round of all the creatures of land and sea and of the air, it enters again into a human body as it comes to the birth, and that it makes this round in a period of three thousand years.” I’m skeptical if this is factually true, considering how many of his other historical details aren’t, but I think it’s a fascinating foundation for a story. For several months the idea floated around in my head, gradually taking shape as a myth-like tale of two humans who wait for eternity to meet each other again, coming closer, then farther, but never quite meeting, as three thousand years come and go and come again. Over a year later, the story finally took shape as “The Three Thousand”.