Emmett Swan’s story “The Song of the Moohee” was published in Metaphorosis on Friday, 14 May 2021. 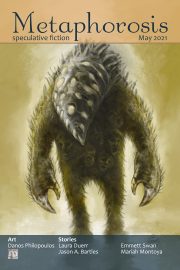 Most of the stories I write, and this one is no exception, are driven by conceptual explorations. For “The Song of the Moohee”, the concept I was interested in was social identity. If we look at the historical record, social identities, such as cultural or racial identities, are often treated with neglect or even downright disrespect.

An extreme example is when a social identity is virtually obliterated through conquest. Think of Rome’s treatment of Carthage after the Second Punic War, or American politicians forcing free-ranging Native Americans into reservations.
Enslavement is another example. African slaves were captured from different tribes, each with their own cultures. Though in most cases their cultures persevered on their home turf, relatively little was retained by the communities of slaves at their new locations.

More common and banal examples are driven by economic or political dominance, especially for small-sized social entities living within a non-sympathetic majority.

Perhaps the loss of social identity is inevitable, much like the extinction of species is inevitable, though the loss of a culture, with its language, its religion, its cuisine, its way of seeing the world, seems especially sad. In the story, the Moohee were not only defeated, but their genetic code, which is the core biological identity of any race of beings, was altered, and altered only for the convenience of their masters. It seemed to me the most repugnant variant of social loss imaginable.

I imagined the Moohee to be a noble race of beings who greatly valued their social identity, and were strong enough to endure this ultimate degradation and without giving up their dream of reacquiring it. To succeed in getting it back, the Moohee nation would have to practice patience and sacrifice for generations. Will they succeed? Well, you gotta read the story to find out.