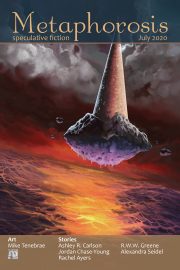 I’ve always suspected that magic, if it existed, would be a profound threat to human survival. It would empower tyrants, create lasting fault lines between groups, and permit destruction on a vast scale. But magic would also afford great opportunities. It would cut down on drudgery, make life more interesting, and in the right hands allow for great progress. “Which of the two would win out?” I’ve wondered. “Would magic help humanity grow, or would it doom us?”

This story flowed out of that question. I thought of a world in which some people could manipulate stone with magic, could shape it to their will. It seemed only a matter of time before some of them, somewhere, used that magic to destroy the world. But not the whole world, not everyone. Some people would use that magic to survive, to keep humanity aloft in the teeth of despair. And maybe—who knows?—that second group would win out in the end. Such things are not written in stone.

I don’t even remember how many times I rewrote the story from scratch to give you the version you see here. I could put together a fat volume with just the half-drafts, false starts, and jettisoned endings. By the time I submitted the story to Metaphorosis, in December 2018, it had already gone through many rewrites; by the time it was sold, it had gone through several more, each one stronger than the last. As a result of all this editing, I’ve learned more about the craft of fiction writing than from every book I’ve read on the subject put together.

I’ve also learned a lot about my strengths and weaknesses as a writer, and about the deep weirdness of creativity; several times I thought a problem in the story was intractable, only to realize, with a jolt of surprise, that the answer was sitting in front of me all along. In earlier drafts, for example, the main character’s motives, role in the Spire, and family members, together with the nature of the Spire, the magic system, and the world, were doled out in a slow, serial sequence, which hurt the pacing greatly; I realized I could fix that problem with ease by smashing all those elements together in the first couple of scenes. One of the joys of writing is having revelations like these.