Pauline Yates’s story “The Secret Keeper” was published in Metaphorosis on Friday, 4 June 2021. 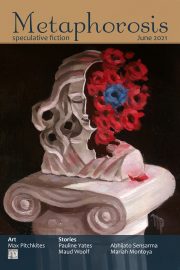 “The Secret Keeper” developed from an idea I had for another anthology call back in 2019. The theme for that anthology was based around the Zodiac signs. Being a Taurus, I wanted to write a story that focused on Taurus strengths, with loyalty and trust at the top of my list. I penned the original version, but put it aside to work on other projects because I needed more time to think about how best to show the traits I wanted to portray. The driving question behind the development of this story was this: What would the world look like if there were no one you could trust?

A year passed by the time I got back to it, and when I read over what I had, I thought it would be sad to waste the idea, so, with nothing else in the pipeline, I had another crack at it. As I’ve written for Metaphorosis before, I felt this story would be a good fit for what they like to publish. I submitted the first version of “The Secret Keeper” in October, 2020, but it was far different to the final published version. Despite much disarray in the world-building, the concept must have caught the publisher’s eye because I was offered a rewrite opportunity.

Little did I know, it would take nine more versions, an extremely patient publisher, hours of research about Greek Mythology, and discussions with a church minister about the importance of vows, to pull together the finished version. My biggest issue was how to make demigod powers fit into the real world, because I was mixing the two. I’ve never written fantasy before, so this was more a challenge than I realized, but I am a fan of Percy Jackson and knowing how that world worked helped.

Ironically, every time I struck a hurdle, I’d find the answer. It was as though this story was begging to be told, and it was giving me all the clues. I just had to put them all together.

If you’ve read “The Secret Keeper”, I hope you’ve taken from it the importance of staying true to your word. If you haven’t read it, please consider doing so, especially if you keep a secret.