Spencer Nitkey’s story “Calling Me Home” was published in Metaphorosis on Friday, 7 August 2020. 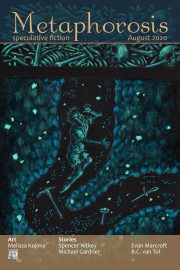 This story came to me after an afternoon reading articles about quantum mechanics. Immediately I became obsessed with the idea of quantum entanglement, the fact that you can, essentially “entangle” two particles, so that, even when they are separated, moving one, affects the other. Recently, in 2017, a team of Chinese researchers tested the limits of entanglement by sending one entangled particle up in a satellite, 1200 kilometers from the other. The two particles were still entangled! I read that Einstein had called quantum entanglement “spooky motion at a distance”. Anything that can make a scientist use the word spooky seems like perfect science-fiction fodder to me. Consciousness is a perpetual interest of mine, and eventually the idea of what a synthesis of consciousness and quantum entanglement could mean formed the conceit of this story.

Then the real work of writing began. I started by trying to find a central character. Claire came to me pretty quickly. I recently started a new job (which I love), but it made me think about how hard it can be to juggle life and work, even under the best of circumstances. What would it look like if a company, using science, had control over the physical location of your consciousness? What would it be like trying to start a family on Earth while working on the other side of the solar system? These questions formed the basis of the story and the rest followed.