Thomas Ha’s story “A Compilation of Accounts Concerning the Distal Brook Flood” was published in Metaphorosis on Friday, 30 April 2021. 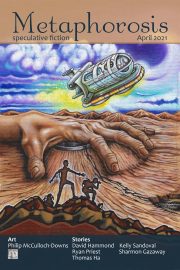 I was a lawyer in another life, and I always found it funny in legal dramas when some major revelation resolved a case decisively and tidily. While I wouldn’t claim the legal mechanics of this particular story are realistic, I wanted to write something that captured more of the anti-climactic reality of most cases (albeit in a grander, sci-fi setting), which is that, even if cases do uncover something substantial, they usually just settle, often to the benefit of the more powerful party and without much disturbance to the status quo. As for the ecological disaster described in the story itself, it’s loosely based on coal slurry floods, which are unfortunately a real byproduct of the mining industry and have catastrophic effects on communities and surrounding environments.