Thomas Ha’s story “Where the Old Neighbors Go” was published in Metaphorosis on Friday, 11 September 2020. 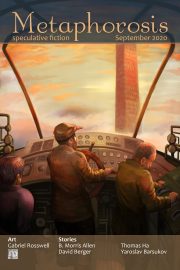 The idea for “Where the Old Neighbors Go” came from my experiences with several different neighbors I had over the years. They were all variations of the archetypal nosy neighbor: aggressive, intrusive, and trying, I think, to make the messiness of the world conform to some kind of imagined order. There was one neighbor in particular who became the genesis for Mary Walker, the protagonist of the story, and whom I got to know much better over several years. While there was nothing I learned about this neighbor that ultimately excused her behavior, I did discover things that I think humanized her and made me understand her perspective, namely, that she harbored a deeply-held belief that if she didn’t involve herself in her neighbors’ lives (whether putting away their recycling bins or complaining about strange noises), the neighborhood might somehow come undone at the seams.

From there I knew I wanted to write a story where a neighbor like that was actually, unbeknownst to everyone around her, right about that belief: that she was the sole person keeping a threat from tearing the world apart.

By the same token, that threat, a demonic neighbor who moves in across the street from Mary, is based (very loosely) on me and others of my generation like me: young, smug, and indifferent to the disruption our invasion of older neighborhoods cause.

In the end, I found something very satisfying about pitting a character as wily as Mary Walker against an arrogant hipster type and seeing whether, and how, she would prevail.