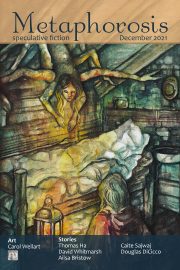 When I started writing “Dry Season”, the one thing I knew for sure was that it’d be set in Lake of the Ozarks during a very extended drought. The plot only started to develop during the pandemic, when tourism completely dried up. For a place like Sunrise Beach, which is so small it’s technically a village and has an economy that relies almost completely on tourism, that was devastating. When things get that dire, people often appeal to their deity of choice. And, there it was: the inciting incident of the story.

Next came the characters, and the rest of the story is more theirs than mine.

First, the people of Sunrise Beach, who are presented as a sort of collective consciousness. This was inspired by the chorus of the Maids in Margaret Atwood’s “The Penelopiad” (though the townsfolk of Sunrise Beach are certainly guilty where the Maids were not). It’s also an unintended reference to groupthink—surprise!

The Lake God, was originally intended to be this sort of primordial, eldritch beast. In his present form, he’s more a distillation of Lake of the Ozarks given human form. That decision was completely spontaneous. Honestly, it was less a decision and more, “Well, there he is.” His character is, rather unexpectedly, very precious to me, and I hope you all enjoy him.

Now, Janie, is very different than any protagonist I’ve ever written in that we aren’t privy to many of her thoughts. She’s really a reflection of my own somewhat complicated relationship with being from a rural town. Clearly, she both loves and loathes Sunrise Beach, and, like many of us that both love and loathe our hometowns, she’s developed a bit of a savior complex about it. Hey, if she ends up unhappy in her new role, she can always find someone else to take over, right?