Connor Mellegers’s story “Freely Given” was published in Metaphorosis on Friday, 18 February 2022. 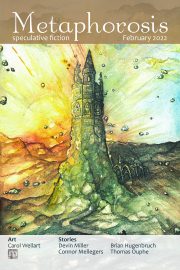 A few years ago I read some of the writings of Marcel Mauss and was introduced to the idea of a gift economy. In a gift economy, goods and services aren’t sold or traded but are given as gifts without an explicit agreement for return. I was immediately interested in the idea of a gift economy not only as a principal economic system but also as an underlying economy, one which exists beneath the surface of a market economy. When we think of gifts in Western society, often our minds will go straight to birthdays and holidays or charitable giving. But gifts are so much more pervasive than that and there are countless things we do for each other without a clear reward or exchange in place. There are obvious things, such as cooking and cleaning and work we do for one another in home/work/community settings, and then quieter and subtler things, like compliments, advice, lending a sympathetic ear, etc.

Initially, I just knew I wanted to make a story centred around a society where gifts constituted the principal economy, and market exchange, even if it was present, was considered lowly and distasteful and something to exist beneath the surface. I wanted to explore how the ideas of success and admiration would change as well as how inequality would manifest. Of course, no market economy has anywhere near an equitable distribution of wealth, and how it is distributed is subject to pervasive and often arbitrary (but rarely random) prejudices. Despite a very different economic model, the world I was imagining would feature its own inequalities. I imagined that in a world centred around gift-giving, who gives and receives what is unlikely to be even, but just as with a market economy, what a person receives dictates the power and comfortability they are afforded.

Stemming from this concept, I wanted to explore the idea of a protagonist experiencing an unexpected and unearned windfall. In a world where respect for one’s generosity is the primary currency, I wondered how ill-gotten gains might impact someone, particularly if that person had never really examined the rules of their economic and social system before.