J.A. Prentice’s story “Shades of the Sea” was published in Metaphorosis on Friday, 28 January 2022. 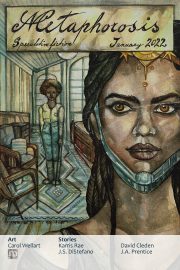 “Shades of the Sea,” at its core, is a story about a changeling—even though the word is never used.

For centuries, humans have told stories of possessions and changelings. It was the concept of changelings that particularly stuck with me: the child that isn’t a child but rather an inhuman creature. Many scholars believe these stories were told originally to explain neurodivergent and otherwise “difficult” children. It is an easy lie, a comfortable lie: the child you are raising that is so different from the child you wanted isn’t your child at all. Your child is somewhere out there, in Faerie, and what lives in your house is only a pretender. An inhuman thing in a child’s skin.

Similarly, many of the “signs” of possession in old stories are symptoms of mental illnesses. It’s a way of explaining the inexplicable, but also a quite literal demonization of these conditions.

As a writer fascinated by ancient folklore, I wanted to do my own take on the concept of a changeling or a possession. As a neurodivergent person, I knew that I wouldn’t be telling a traditional take, where the true child is recovered or the possession miraculously lifted. I knew the story I wanted to tell was a story of acceptance, love, and the beauty in the strange and monstrous. It’s a story about how just because a child isn’t who you wanted—in this case, in a quite literal sense—it doesn’t mean they aren’t still a child, in need of love and protection.

Why the sea, then? It’s true that there is little—if any—link between changelings and the sea, but the sea holds both a wild beauty and an unfathomable depth. It often lies so close to us, but swim out only a short distance and it drops away into a seemingly infinite dark. The sea has always held a power over me, as it has many writers and artists. There was nowhere else someone like Larnia—or like the Queen—could have come from.

So that is where the story came from: the changeling child from the deep, found drowned but living in the crashing surf…