J.C. Pillard’s story “The Spinster and the Sea” was published in Metaphorosis on Friday, 22 April 2022. 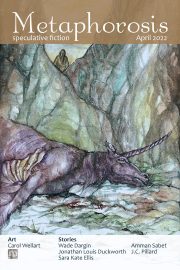 This story can be partially blamed on Tamora Pierce and her Circle of Magic series. If you haven’t read Tamora Pierce, then please put this down and go pick up one of her tales right now! The Circle of Magic series was some of the first YA I ever read, and the first book of the series, Sandry’s Book, focuses on the titular character and her ability to use spinning to work magic. Pierce herself has spoken about viewing handcrafts as a kind of magic, and I remember reading that book and being downright envious of Sandry’s ability to create with her hands.

I did, eventually, learn some handcrafts myself. I started knitting years ago and spinning this past year. One of my friends possesses a spinning wheel, and very kindly let me try it. (She also took a look at an earlier draft of the story to make sure my terminology was right—thank you, Laura!) While using that wheel, I was reminded of Sandry’s Book, and the question of what magical spinning would look like popped into my mind once more, planting the first seeds of this tale. Magical spinning, I reasoned, would spin impossible things, like sadness and rage and storms. And what better place to spin a storm than on a cliff, overlooking the sea?

Nadia, my main character, came to me almost fully formed—angry and isolated and nursing an old wound. I loved the idea of a woman whose spinning is both the source of her power and the source of her isolation. For that reason, Nadia is not the first character we meet. She is alone within the tale, both literally and figuratively, and it takes another craftsperson to make her face that fact. The story can only resolve once Nadia acknowledges that she’s the source of her own problem. It is only through that acknowledgement that Nadia is able to use her power for something greater than herself.