J.C. Pillard’s story “The Tick of the Clock” was published in Metaphorosis on Friday, 8 October 2021. 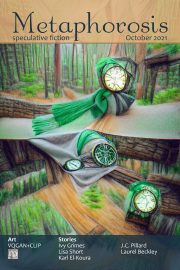 Like many of my stories, “The Tick of the Clock” started with an image: a young man speaking to an old woman, begging for her help. It was a compelling image, but I wasn’t sure what he needed help with, which really put a wrench in my plans to turn it into a story.

The idea stewed in my brain until I rewatched the old Twilight Zone episode “Nothing in the Dark,” which personifies the figure of Death as a young man and centers around a conversation between him and an elderly woman. I have always liked the idea of anthropomorphic personifications (thank you, Terry Pratchett), and this idea combined with the image in my head. The old woman was not a woman—she was something wearing the figure of a woman. After some more fiddling, I arrived at who she was. Not death, but that which brings it: Time.

Once I had her character figured out, I turned my attention to the young man and how he finds himself with Time. I love strange, liminal spaces, so began the story with the young man—who, it turns out, is a prince—travelling through an endless forest before arriving at Time’s cottage.

It was the prince, of course, who was going to be changed by the story, and who was thus the more challenging of the two to write. Time exists on her own terms—she has nothing to learn in the tale. But the prince does. That was probably the hardest part of the story to write: letting the prince come to terms with the curse on his kingdom, and allowing him to make peace with what he must do to break it.