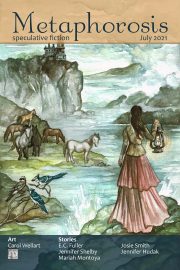 I caught the first threads of “Free Hugs” after seeing a heartbreaking status update from an older relative who didn’t know how she was going to make it through the first pandemic lockdown in Atlantic Canada without hugging her grandchildren. I immediately picked up my notebook and wrote a story about an engineer creating a robot people could send to hug their aunties and grandmothers. After I let the story rest, I realized I was more interested in what might happen to those robots after they weren’t needed anymore.

As someone who was raised in, and escaped from, a cult, I’ve always been interested in the cross over between cult programming and a robot’s programming. It took a bachelor’s degree in anthropology to understand my own programming. This past year, staying home, consuming far too much social media, it was hard to ignore the cult behavior that became unnervingly commonplace. While I’d never written about cult survivors before this year, they started populating my fiction. More than ever, I wonder who I’d be now if I hadn’t stumbled into that first Intro to Anthropology class and recognized what it could do for me. Cyndl became a way to explore those might-have-beens. Once I knew who she was and understood the doctrine of the technology cult she’d escaped from, the trick became determining how she would survive in a post-apocalyptic world where she wouldn’t have any access to deprogramming.

Pairing Cyndl with the Hugbots seemed a natural union, but of course story lives are never that simple, so I had to make it difficult for all of them. I hope readers look past Cyndl’s brokenness to see how much hope she holds in her heart.