L.J. Wetherby’s story “A Wizard Comes to Shorehaven” was published in Metaphorosis on Friday, 6 August 2021. 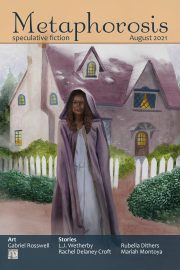 The prime mover for this story was a dear friend of mine who has enjoyed a lifelong fascination with wizards. This friend organises regular storytelling events among our acquaintance, and since I began attending those events, I’ve always had it in the back of my mind that stories about wizards are likely to be especially welcome. This knowledge alone has offered plenty of stimulation for the imagination.

“A Wizard Comes to Shorehaven” was also partly inspired by The Mountain Goats’ 2019 album In League With Dragons. I read an interview with band leader John Darnielle around the time the album was released where he mentioned that the record was originally a rock opera “about an ageing wizard whose seaside kingdom is under siege”. And I remembered my wizard-loving friend and thought that I could take a stab at a story closer to the original premise of In League With Dragons.

When I began writing the story, I didn’t have a strong sense of where it was going to go, which is not at all uncommon in terms of my process. There seems to be a distinction between writers who prefer to plan, and those who begin in the hopes of seeing where the story might take them, and I definitely fall into the latter camp — I relish the surprise and delight of seeing what comes out during the process, and the end product is always much better than anything I could have crafted if I’d plotted it all neatly from the outset.

All I had in mind when I started was the central character of the wizard and the seaside location. I have a particularly strong inclination toward cosy settings, especially in fantasy, so it didn’t take long for “seaside kingdom under siege” to transform into “small seaside town filled with the kinds of people who prefer things to continue as they have always done, only more favourably towards themselves as far as possible”. The character of the Mayor as an embodiment of that attitude sprang up fairly quickly once the setting began to solidify.

Leonie was probably the biggest surprise of all the characters — they were not someone whom I’d intended to create from the beginning, but when they began to form as a character I soon saw the possibilities they offered in terms of giving the story purpose and focus, and shaping it towards its conclusion.

One of my incidental aims as a writer is to represent queerness, gender, variance and disability as facets among many that contribute to the makeup of complex individuals, rather than positioning those things as the sole markers or primary traits of the character. We still live in an era where these topics are often handled with an air of the after-school special, where someone’s queerness or disability (or, rarely, both) drive the plot more as shortcomings to be defeated rather than natural variances that merely are. Leonie falls slightly short of my own mark here, given that their queerness, gender variance, and disability do drive the plot, but my hope is that this plays out in a way that is more liberating than constraining, and much more about Leonie’s sense of who they want to be than about who they feel they ought to be in order to satisfy the expectations of those around them.

“A Wizard Comes to Shorehaven” was a story that I thoroughly enjoyed writing, and I’m delighted that it’s found a home at Metaphorosis.