Matthew Gomez’s story “Right Behind You” was published in Metaphorosis on Friday, 12 November 2021. 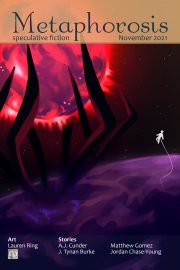 I taught high school English for a number of years, and during that time I wrote a series of lessons based on a story in The Economist called “Fields of Tears.” The article describes the lengths migrant farm workers from Latin America go to in hopes of earning a better life for their families in the United States. Many of these workers not only endure a perilous journey to get to the U.S., they then suffer through tremendous hardships as part of a workforce that performs back-breaking labor to hand-harvest crops. It’s a thankless job, but one that promises at least the hope of a better future. The U.S. has a history of exploiting others’ desperation for our gain. For “Right Behind You,” I tried to imagine what that exploitation might look like in a future where an environmental disaster has threatened the safety of the West Coast. Like harvesting crops in the present day, the nuclear disaster has created a job that even our country’s most impoverished and desperate won’t touch. The story evolved into an investigation of how shared suffering might act as a bridge between two people seemingly at odds. I believe compassion and empathy are our two most defining emotions as humans, and I wanted to see how those feelings might stack up against an individual’s instinct for self-preservation.