R.E. Dukalsky’s story “Hope on the Vine” was published in Metaphorosis on Friday, 4 March 2022. 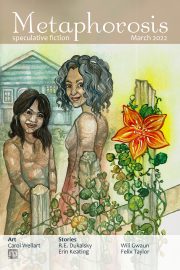 “Hope on the Vine” grew from two very different seeds. In my non-writing professional life, I work on peace processes, political transitions, and rule of law, which means I spend a lot of time thinking about the aftermath of conflict. In my reading experience, speculative fiction tends to focus on how conflicts begin, how they are fought, or how they end — but not the long generational slog toward (or away from) peace that comes after. (In this, spec fic mirrors “real” life in countries that observe, but haven’t recently experienced, conflict.) It’s not just about rebuilding shattered infrastructure; it’s also about restoring trust between communities, keeping peace talk promises, and demonstrating the will to make a future different from the past. Making peace also requires that societies acknowledge the wrongs committed in the past, hold the perpetrators accountable, and try to repair what can be repaired (a series of processes collectively called transitional justice). It’s hard, slow work with many steps sideways or backward as well as forward, requiring change in systems and institutions but also in individual hearts.

One of the most difficult elements to rebuild after conflict are the characteristics that help societies hold together. These intangibles are often vaguely categorized as “resiliency factors,” and they include trust, tolerance, a sense of a shared future, community solidarity, and, yes, hope. This story is an attempt to envision what transitional justice might look like in a world with magic, where resiliency factors are tangible things. I wanted to write about a perpetrator coming to terms with both her own past crimes and her role in repairing the greater harm to which those crimes contributed. I also wanted to look at a world where wizards were held accountable for their deeds, not by a group of brave heroes, but by a court and a system of law. And finally, I wanted to imagine a post-conflict scenario where subsistence farmers finally got some justice.

The other seed for this story is much more literal. I’m terrible at growing squash. I can grow many tasty things and squash are notoriously easy plants, but for some reason they elude me. I’ve spent many days just like Nima, screaming “why won’t you just grow?” at a withering squash vine. Fortunately, my life and freedom have never depended on a zucchini or a kabocha, but I wanted to convey the sense of helpless frustration that comes from doing everything you can think of for a growing thing and still seeing it fail.

So that’s where “Hope on the Vine” comes from: meditations on transitional justice and my own gardening mishaps. Hopefully you enjoyed the hybrid they created.