Daniel Ausema’s story “By the Scars Shall You Know” was published in Metaphorosis on Friday, 15 July 2022. 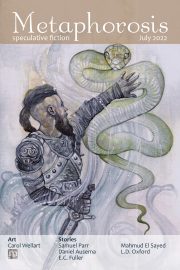 One of the writing forums I’m on had a prompt contest. Someone had come across artwork on Deviant Art or somewhere similar that showed a cloaked character standing outside a city with massive thorns all around. The most likely intent of the image was that the character had just cut through the thorns to reach the ruins of an abandoned city, perhaps something like in Sleeping Beauty, but I took it in the opposite direction with him setting out from it, into the thorns that were supposed to be for protection.