We recently published some statistics on rewrites. One thing we didn’t dig into in detail is just how many rewrites are involved.

A word on process – when I offer an author a chance to rewrite, we’re entering into a relationship. It’s a rare case when I say to the author, “Fix these few things and I’ll buy your story.” (Even when I do, not everyone takes the offer). What I’m saying is “Let’s have a conversation about your story.” I went into this in more detail on Patreon.

Here are few rough statistics. They draw on a slightly different source than the last set, so they won’t match up perfectly. Note that they don’t count authors whose stories I buy essentially as is. We’re talking about rewrites here. 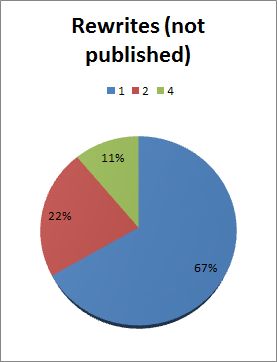 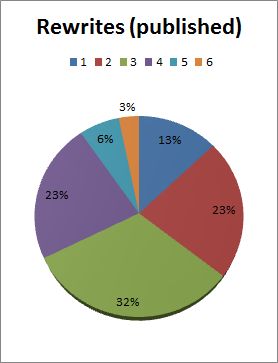 Of 40 writers who took us up on our offer to rewrite, 9 either decided at some point not to continue, or we decided not to continue with them. We bought the other 31 stories – 75%.

Of the thirty-one stories we did buy, the range was greater. It’s a bell curve ranging from one to six** rewrites, and peaking at three rewrites. The median is 3.5, the mode is 3, and the mean is 3.

* We all make mistakes, and this was one. We’ve since introduced an earlier cutoff, so that if we have any doubts it will work out, we’ll stop sooner, rather than having to reject authors after they’ve done a lot of hard work.

** Note that the number of rewrites doesn’t correlate to final quality. The story that had six rewrites was by a terrific, committed author, and it’s one of my favorites.