Most of the stories we publish have gone through an editorial revision process. I’d estimate that less than 5% are accepted as is. And even the ones that I expect to require only light revision sometimes end up taking longer than expected. In short, revision is central to our acceptance system. As editor, I enjoy the process – the discussion with authors about what they’re really trying to say, the structural adjustments, the fine tuning. Naturally, I’ve been interested to know what authors themselves think about the process. Also, not everyone submits a revision. That’s a perfectly reasonable response, but one I wanted to understand better. I wanted to wait until there was a sufficient number of Metaphorosis authors to make a survey credibly anonymous. At the end of a full year of publication (15 months of submissions), I felt we had that. Here are the results.

One point before we start – a few comments wished they had submitted revisions after all. You still can! There’s no time limit on revisions, and we’ve had both first revisions that come in after many months, and revision processes that stretch over months as well. If I liked your story in 2015, I’ll still like it now.

We asked a handful of questions – mostly specific, one catch-all. Out of about 80 authors surveyed, I was thrilled that 50 responded. 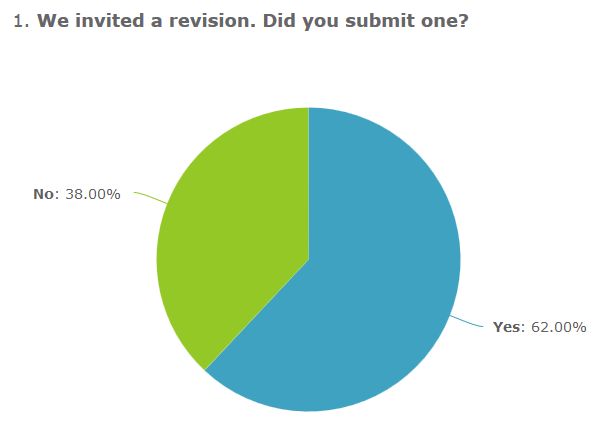 2. Why did you choose not to submit a revision?
Naturally, we only asked this of those who did not re-submit. We offered a range of choices, but notably failed to include the most obvious option – “Haven’t gotten around to it.” Virtually everyone chose “Other”. More on that later. 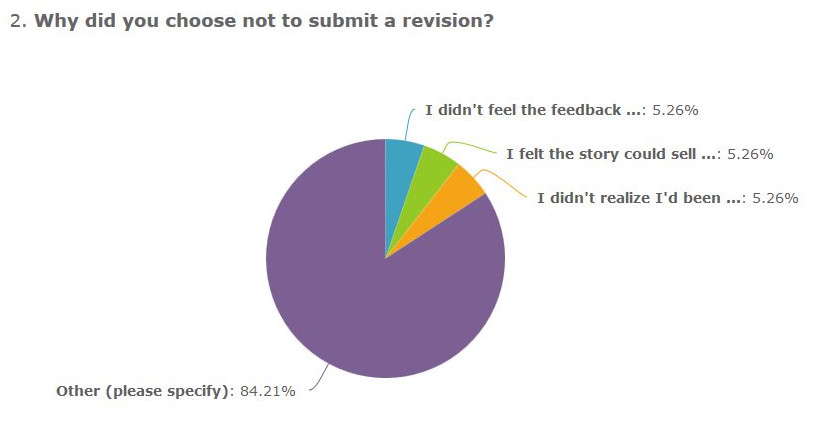 3. How many revisions did your story go through?
Last time I checked our own stats, this averaged about three, and varied from 0 to 6. But people have their own perceptions of revision, and I wanted to check how well they correlate with ours. Fairly well, it turns out. 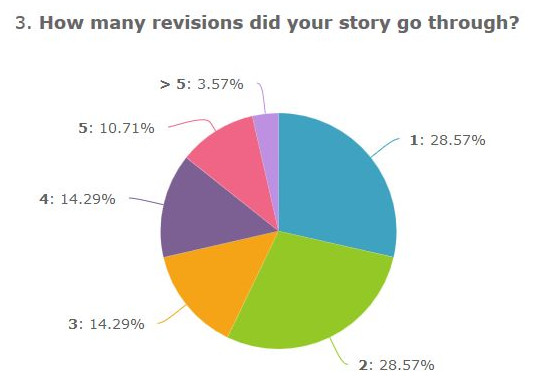 4. How useful was the revision process?
Now we get down to the heart of it all. Was the revision actually any use, or did authors just feel jerked around by the editor? We broke down the process into the major stages most revisions go through: structure, balance, and polish. The good news is that most authors found each stage at least somewhat useful, and a large number found each stage very useful. Consider my heart’s cockles warmed.

5. Do you feel your story was better after the revisions?
This is a variant of the question about utility, but aims for the more general, visceral response about whether the whole thing was a waste of time, or a question of choosing between equal stylistic choices.
Here again most authors felt their story was better in the end, and a surprising none thought the final version was worse. A meaningful percent said “eh” or “other”, though, so I’ve cautioned myself against overconfidence. 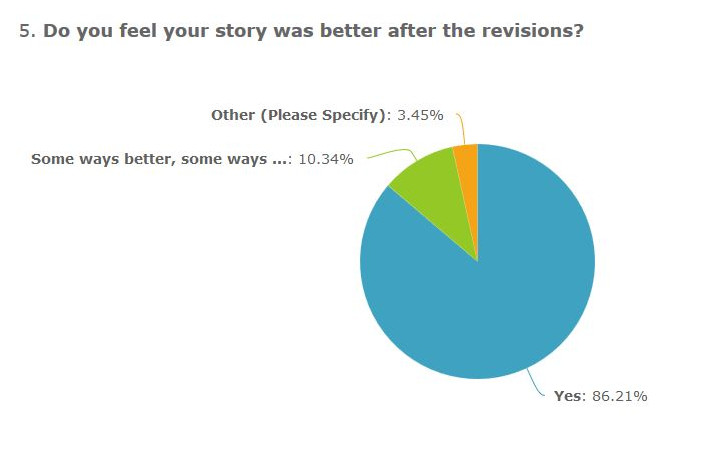 6. What did you think of the length of the process?
This was less crucial, but revision does take time and effort, and I wanted another look at whether we’re spending it in the right places. Generally, authors were satisfied.

7. What’s a fair number of revisions before you would find a rejection unreasonable?
One of the lessons I learned during the year was the risk of unfairness – of asking an author to do a lot of work, and then rejecting the story anyway. I can think of at least two cases where I felt bad about that – not about rejecting the story, but about not doing it earlier. On the other hand, I’ve seen a number of stories where the author didn’t get serious about revision until about round three. I’ve adopted an informal policy of rejecting revisions after two tries (version 3, in other words), if there hasn’t been substantial progress. Sometimes after only one revision, if I ask for structural changes, and the other only tweaks the prose. It’s a tricky decision, because a) I want to give the author a fair chance; b) if I ask for a revision, it’s because I really like something about the story; and c) I don’t want to lead the author on. In short, I wanted a second opinion from the authors themselves. Most agreed that two revisions was a fair rule of thumb.

8. How can we improve?
This was the catch-all question, in case authors had more to say

Questions 2 and 8 offered opportunities for extended comment. The quantitative data give me comfort that we’re doing a reasonable job with the revision process, and we don’t need major changes. The qualitative comments are where we get the nuance about what could be better.

Overall, narrative comments were a mix of positive and negative, and with a lower than expected level of snark. Below are a few of the key themes that came up.

Why I didn’t revise

How could we improve?
I wanted more back and forth. This is a disappointing one, and clear evidence of failure in the process. In addition to specific feedback, I ask two stock questions in every request for revision – both about the authors intent. I haven’t checked, but I’d estimate as much as 1/3 of authors don’t answer these; they just submit the revision. That’s easier for them, but unfortunate for me, since I don’t get to see their plan before they do the work. In many cases, the answers to those questions are illuminating, but don’t change my comments. In just as many, howver, it gives me a chance to say “This part of your intent is working, but this other part is not.” My goal is always to find a story I think is strong within the story the author wants to tell. I have to know the latter to find the former. Of course, this survey answer could simply refer to a rejection after only one revision attempt. Rare, but it does happen.

Variants on “Your feedback missed the point.” Either I missed the point of the story, or the changes requested were beside the point, or the author thought the feedback was wrong, or other editors didn’t agree and bought the story anyway. There will always be differences of opinion. No doubt I sometimes make mistakes, but if it’s a sale elsewhere, that’s a win for the author, not a loss for me.