We get a lot of great submissions, but it’s no secret that we turn away over 95% of what we see. The stories we reject vary widely in quality. Some, though, have peculiarities of formatting that lead me to suspect the authors are facing unusual obstacles. In addition, I’m very confident that some of our submitters don’t have English as a native language.

Beautiful writing will always be a criterion for Metaphorosis – that’s the focus of the magazine. However, I’m willing to work with authors on promising drafts that aren’t quite what they should be, so long as I think we can bring the writing to a higher level.

With that in mind, we queried queried several hundred people who had submitted stories to Metaphorosis in the past year. The survey was intended to get a sense of the constraints submitters face – e.g., whether that submission with no commas is likely from a blind person with English as a third language, or just someone who can’t be bothered with punctuation.

The results are below. Keep in mind that the very people with substantial impediments or impairments would have most difficulty in completing a survey.

There were only three questions:

Are you a native English speaker?

Nine out of 10 of our submitters are native English speakers. 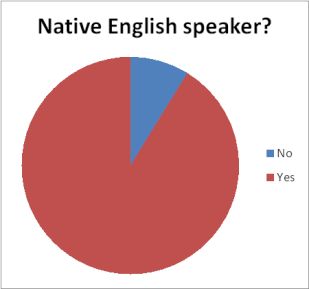 If not, what is your level of proficiency in English?

Unsurprisingly, for authors submitting in English, most non-native English speakers rated themselves as fairly strong in the language.

Do you face any writing impediments?

We clarified the question partway through, resulting in an inaccurate auto-summary shown to survey participants. The correct results show that most submitters hands on a keyboard or other standard writing tools. A percentage had limited dexterity. No one marked a visual impairment.