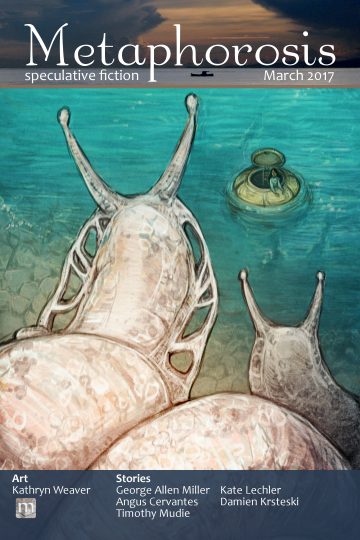 When Rose McAlder died at eighty-five, it took us all of an hour to congregate on her property, rubbing our hands and stamping our feet against the October chill.

We hadn’t known it was she who had lived in the big old house on the corner of Seventh and Price all those years. When the news broke that morning—not only was Norbury’s local recluse dead, but she also happened to be a famous author—we poked camera lenses into brittle thickets of hydrangea to see inside basement windows, smeared our noses on the glass-paned double doors, and rooted around in the shed. What did we imagine we’d find: family photos? Handwritten journals? Uncashed royalty checks? We weren’t sure ourselves, but we knew it had to be there. A scrap, a clue, some insight into the genius who had hidden, nameless, among us for decades.

See, Rose McAlder’s seven bestsellers had been some of the most important works in the twentieth century. And—not that we Vermonters are the sort to be impressed by public opinion—they had changed the face of American literature. Critics compared Miranda’s War to Tolstoy, a sweeping historical drama with a doomed romance at its heart. Arthur Bradley Goes to the Moon, an avant-garde science fiction novel, was Vonnegut’s inspiration for Slaughterhouse Five. And Je Suis Sharon was domestic realism that, The New York Times stated, had set the standard for “introspection without indulgence.” But McAlder hadn’t published a word since Maxwell Lives!, a Newbery Honor-winner that came out when she was fifty-one. And we wanted to know why.

Why had she lived alone in our town for sixty years? What had inspired her books? And what stopped her writing over thirty years earlier?

But we found no unpublished manuscripts hidden in the hydrangeas or peeping from beneath the welcome mat. The only slightly titillating find was seventeen hoary copies of Juggs piled on the gardener’s workbench.

Dolores Camp, the postmistress, checked windows to see if they were cracked, while Tom Steadman jiggled doorknobs. Missus DeLoitte, whose family had lived in the big old house for a time in her youth, looked hungrily at the second-floor balcony, reminiscing about being seventeen and spry enough to climb lattice-work in the dark.

“What had you been doing, that you needed to climb out your window at night?” Sylvia Chittenden, the church organist, muttered. She stared down the long slope of the tree-lined lawn to Seventh Street, where her husband, Jonas, loitered as the look-out.

“Oh, nothing,” giggled Missus DeLoitte, shoving her hands deeper into the recesses of her tweed overcoat. “Nothing at all.”

But everything was locked as tight as it had been when McAlder was alive. No one but her lawyer had a key to the house. When he arrived in his sleek black Lincoln, he marched to the front door, let himself in, and shut it behind him. Click went our cameras. Click went the door. And we collectively raised our eyebrows, pursed our lips, and went back to minding our own business.

“She may well have been a genius—I never read her books, myself—but she never made herself too friendly,” remarked Barbara, Tom’s wife, as we huffed back to the center of town to commiserate over coffee in the lobby of the Hartfield Hotel.

For a month after her death, the news was filled with McAlder’s praise. The USPS issued a stamp. The literati quoted her constantly. Celebrities tweeted about how reading her works had inspired them to act, sing, play football, or become television chefs. Tourists began to flock to Norbury to pay homage to Rose McAlder.

Except for Lucy at the five-and-dime, who turned a pretty penny on homemade Christmas ornaments with McAlder’s face on them, Norbury stolidly ignored the attention. “If she didn’t want to be one of us,” Jonas Chittenden said, “why should we act as though we have a special claim to her now?”

Reporters hounded us, calling on our home phones during dinner time, asking questions to which we had no answers: Was McAlder herself a lesbian? Or did she see marriage, and indeed love itself, as a patriarchal trap, as depicted in her standout Broadway play, What’s the Deal with Dahlia? Had she been abused as a child? Or was she, like most successful female novelists, secretly a man?

We did not justify impertinent queries with responses.

Three months after her death, the tell-alls erupted from old schoolmates and next-door-neighbors from McAlder’s childhood in Connecticut. A second cousin wrote a misty-eyed book about what it was like growing up with “Rosie,” painting her as a fun-loving imp with a penchant for the outdoors. But we dismissed this tender concoction wholesale, agreeing, in the words of her gardener, Gregory Totts, that whoever Rose McAlder had been, she was “certainly not one for making mudpies.”

It was at this point that Alphronsia Gallagher-Burton came forward to a prominent tabloid with a new theory—and evidence. A native Norburian, she had moved away to Burlington when she was in her teens. But her father, Martin Gallagher, had been the town doctor for decades. On his deathbed, Alphronsia reported, he told his daughter that he had secretly helped the town recluse give birth. Not once, but seven times, and each out of wedlock, he was sure. The first six were all stillborn. The seventh and final child was born alive, but with a weak heart. “The last thing I saw as I left the house,” he said, his voice quavering, “was her cooing to him, cradling that sweet baby in her arms.”

At the time, Alphronsia had dismissed the story as the ranting of a man in the grip of senility. But once McAlder died, Alphronsia searched through her father’s files and found records of the births, signed R.M. Furthermore, she realized that each of the births predated the publication of one of McAlder’s books by about a year. “Could it be,” she posited, eating up the media attention, “that her books were written out of post-partum depression and grief?”

We surreptitiously bought copies of the magazine, hiding them inside coats and bags.

No one in Norbury had known about the children. But then, we hadn’t known anything about McAlder either. She lived in hermitical solitude: groceries delivered and all house-calls turned away at the door. Alphronsia’s hypothesis about the one living child was that he’d eventually been given up for adoption. Her explanation to the press was simple and condescending: “In a town as provincial as Norbury, illegitimate children are a blight on a woman’s character.”

At which we sniffed and muttered to each other about the corrupting influence of the big city.

After Alphronsia’s story was published, an Internet campaign was launched to find “the lost child of Rose McAlder.” Several dozen people, adopted as toddlers and without clue to their parentage, took DNA tests but no relation was ever found (although two orphaned brothers, separated at birth, met, struck up a relationship, and realized that they disliked each other intensely). Soon, however, a controversy about leash laws in national parks began to dominate public discourse and the conspiracies around the lost heir of Rose McAlder began to die down—we hoped for good. It was early spring and we didn’t want anything to distract from maple syrup season.

The big house on the corner was eventually sold to Tom Steadman, who took out a large mortgage. He was Norbury’s best contractor and reckoned he could make a mint turning it into an upscale resort catering to the fall-color tourists. He began renovations right away, starting with the peeling paint on the wooden siding. When he began the final phase, finishing the basement—which did not even have a poured cement floor—he found the secret we’d all been so eager for.

The digging had unearthed seven small coffins, most only a foot and a half long. Each was home to a carefully arranged collection of tiny bones covered in dried flower petals. Sylvia Jones had to look away from one skeleton, with a locket twined around its fingers. At another coffin, Rev. Robinson pulled a dusty velvet ribbon from a delicate wrist. The largest of the coffins, about three feet long, lay under the northeast basement window, looking out onto a bank of ferns. The crabbed fingers of the inhabitant clutched a stuffed bear, and its skull was missing all its teeth.

At the bottom of each coffin, peeking from beneath the skeletons, a handwritten manuscript was discovered. They were first drafts of McAlder’s seven books, written in rusty ink on crumbling paper. Each book was bound in leather as fine as a newborn lamb, but badly tanned, as though it had been done by an amateur. Barbara stroked the smooth skin with a gentle finger, then recoiled, shuddering.

“What is that?” asked Tom, lifting a silky braided cord that formed the clasp of one of the books.

Tom set the book down as quickly as he could without dropping it.

The book from the largest coffin was different. Instead of a featureless cover, its cover was studded with baby teeth, like twenty tiny irregular pearls, ornamenting out the title: Maxwell Lives.

Sylvia gasped, looking around the room. “Do you think …” she started, then bit her lip, shaking her head. “Losing a child is a terrible thing. To lose seven, one after another, when you’re all alone …”

“People do powerful strange things in the grip of grief,” Rev. Robinson nodded.

We could have written our own bestselling novel about that discovery, or sold photos to any national publication. But that wasn’t our way. We covered those coffins up and, a week later, Tom had leveled the ground over them, poured a solid concrete floor, and installed several large screen TVs. He rented the space to the Presbyterian film club on alternating Tuesday evenings. And we did our best to forget what had been found in the basement … except for Dolores, who had the same comment every time a tourist mentioned the mystery of McAlder’s missing child.

“Her books were her children,” she said. “That’s all there is to it.”