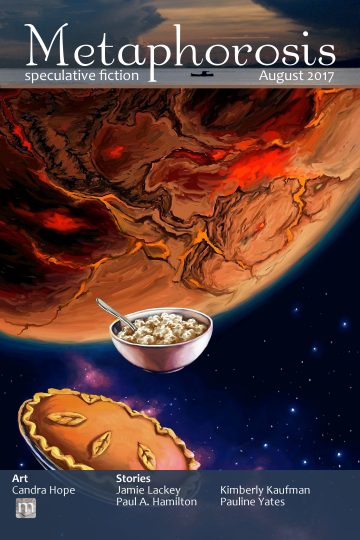 The arrival of delegates from the Planetary Migration Program raised false hope in my district. Not only has the maximum age for entry to the off-world colony been lowered, we were given less than a week to prepare a concept to prove worth of passage. But with the demise of earth a certainty, hope is all I have left. This event is my last chance to secure a future for my family.

With my eligibility for potential passage verified, I enter the town hall and find my allocated table. I’m in the last row at the back, too far away to catch a roaming delegate’s immediate attention, but at least I’m not near the entrance doors. As the delegates arrive to inspect the concepts on display, Desperates—those who have long lost any sense of community cohesion—accost the delegates with pleas for passage, or try to peddle stolen ideas. Security guards keep the most vocal Desperates in the foyer, but amongst the crowds that clog the aisles—those too old, too stubborn or too scared to leave—I recognise a Desperate seen lurking through our district. I check the name tag that’s pinned to my pocket. I’m glad I used two pins. Ideas aren’t the only thing Desperates steal.

As I arrange the boxes containing my entry on the table, despair creeps into my thoughts. If I’m unsuccessful today, will I end up behaving like a Desperate in order to keep my family alive? But to what end? Our district is supplemented with food packs but the last delivery never arrived. While evidence of theft points to Desperates, the decreasing amount in my allocated ration points to the limited food left on earth. My own tests reveal the poison in the atmosphere from the earthquake that split the mantle is far worse than reported, but what good is knowledge when there is no hope of survival? Better the people of my district embrace an us-against-them mentality with the Desperates than dwell on a slow death from starvation.

A blue-jacketed delegate enters my aisle. His robust frame is as alien as the planet I’m trying to get to. He stops at a table down two from mine, but when the presenter fumbles the mechanics of his concept, the delegate shakes his head and turns away. As he continues along the aisle, he’s followed by the Desperate I’d spotted earlier. The Desperate’s cunning expression puts me on edge but with a delegate so close, I’ve no time for caution. Opening one of the boxes, I lift out a pie and place it on the table, waving my hand over its top to make the aromas swirl through the air. Cinnamon. Ginger. Cloves. Nutmeg. Chemical replicates; fresh spices were lost long ago. The scent catches the delegate’s attention. He ignores the next table and strides to mine.

His eyes feast on my offering. “Is that—?”

“Pumpkin pie.” Unlike the previous presenter, I smile.

The delegate raises an eyebrow. “Edible?”

I pick up a knife, slice through the rich custard and pastry, and place a piece of pie on a napkin. “My mother’s recipe.”

He picks up the pie and nibbles the baked custard, rolling the sweet desert over his tongue. Taking a larger bite, he pauses to contemplate before consuming the whole piece. When he’s finished, he pats his lips with the napkin. “That’s good pie.” He places the napkin on the table. “As good as this is, our colony doesn’t have the resources for pie. We need new ideas to help people assimilate to their alien environment.”

I nod. “But without giving them the security of familiarity, their yearning for Earth will impede their acceptance of their new planet.”

The delegate grimaces. “Variety in food is an unfortunate sacrifice for continuity.”

I open the second box, lift out a white bowl filled with a porridge-like substance and place it next to the pie. “The colony’s current food source?”

He peers into the bowl. “It’s similar in appearance.”

“And bland.” I hold up a spoon. “Will you taste to confirm that’s what this is?”

The delegate hesitates, but plucks the spoon from my fingers, scoops the porridge from the edge of the bowl and tastes it with the tip of his tongue. He nods in agreement.

Reaching into the breast pocket of my jacket, I pull out a glass vial. “I can make you think that staple food tastes like this pumpkin pie.”

The delegate looks dubious but he doesn’t walk away. Taking back the spoon, I add the clear liquid from the vial to the porridge on the spoon. One drop will suffice. I hand the spoon back to the delegate.

Eating the porridge, his eyes widen. “It tastes like pumpkin pie.” He stares at the vial, then at the pie. But then he frowns. “This is not new. Flavours have been trialled.” He shakes his head. “I’m sor—”

“It’s not a flavour.” I raise the vial to hold his interest. “This liquid will make that porridge taste like the food you crave, no matter what you choose.”

The delegate eyes me like a Desperate but then nods at the bowl. “If you can turn that into a roast vegetable salad, you’ll have my attention.”

“I can.” Dripping three drops of liquid onto the porridge in the bowl, I stir it through then hand the spoon to the delegate. He picks up the bowl and tastes the new offering. With raised eyebrows, he eats the entire serving of porridge.

When he finishes, his eyes snap to mine. “Explain.”

Seeing the Desperate loitering behind him, I lower my voice. “I’ve developed a chemical that triggers the subliminal thought receptors in your brain to make you think you’re eating whatever you desire. The pumpkin pie was an implant test. You chose the salad. You can choose anything.”

The delegate’s eyes narrow. “Anything?”

He places his hands behind his back. “Your credentials?”

“I was a research assistant for the Institute of Future Technologies, biochemistry division.”

He stares at the vial and then reaches into his breast pocket and pulls out a metal ticket. “The transport leaves at fourteen hundred tomorrow.” He swipes the ticket across a band on his wrist and then hands it to me. “Guard this. Only the bearer will be able to board.”

I clutch the one ticket. “My family?”

“My wife. My child.” My mother has already insisted she’ll die an Earthling.

The delegate shakes his head. “Seats are limited.”

“I won’t leave them behind.”

There’s a long pause. He rubs his thumb over his lower lip. “The last time I enjoyed vegetables that good was two years ago.”

I tuck three tickets next to the vial in my breast pocket. I leave the pie on the table. Hopefully, the aroma will distract the Desperate while I escape.