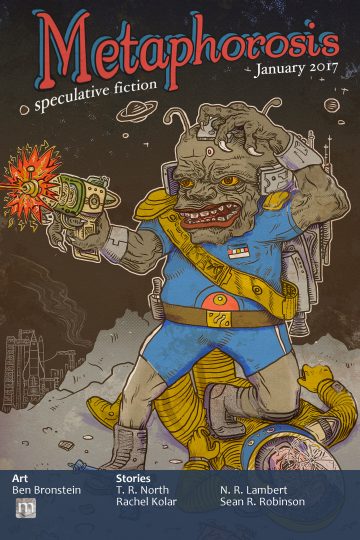 “Do you remember the first time we met?” she asked, her voice thick and opium-drowsy, the slight thaw of early spring making her as lazy as the white-hot sun of high summer makes the old cows in their pastures.

I did, but she didn’t, and I stopped my teeth with an embroidery thread instead of telling her. She watched me with those ice-pale eyes as I clipped the thread, a gold-scarlet against my lips, hardly an accidental choice after all this time, and put my needlework away to come crouch by her divan.

She’d been in her sleigh, her half-dozen white reindeer snorting and stamping proudly in their traces, and everyone in town had turned out to see her. I’d been all of fourteen, barely noticeable in the throng with my secondhand coat and my dishwater hair and my cheeks that refused to pink no matter how hard I pinched them. I could hardly be offended that she didn’t remember.

“You were walking through the paddocks, stunning songbirds,” I lied. “You looked so lovely against the green.”

I took her hand, and she pressed my wrist gently against her cold throat so she could feel my pulse beat against her skin like a bird’s heart.

She smiled at the memory, her lips sliding up over her sharp icicle teeth, and I turned my hand so my fingertips rested just below her ear. She sighed like ice cracking on a pond.

She’d stopped the sleigh in the town square with the barest wave of her hand, the driver as awake to her whims as a flock of starlings are to a predator’s gaze. She’d leaned forward, gossamer cape shifting over the blue-tinted silk of her bodice. She’d summoned a boy I loved hopelessly and from afar, and he’d gotten into the sleigh with her like one mesmerized. He had been, of course. The weight of her regard is terrible, if a person isn’t prepared for it.

I’d been heartbroken when she started the sleigh again, taking him away from me, away from the village. I’d been unstrung and stupid with grief when I went to the wisewoman, the old woman who napped by the fireside at the inn, the woman I asked how to win him back, that boy who’d never been more than passing kind to me, that boy who couldn’t recall my name quite right. She’d patted my cheek and smiled kindly and said, “You don’t.”

“I had my brushes,” I said, “and I was painting your peacock’s feathers, because I felt sorry for him.”

I’d felt sorry for myself, too, when I’d walked all that way for nothing. The wisewoman had warned me, when she finally gave in and told me how to get to the ice palace, that I would not finish the journey the same as I’d started. “And, succeed or fail, if you come home again, you’ll be a different person even from that.”

It had been difficult to get here, and dangerous. It had taken five years and a day, and a great deal of cleverness. And when I found the boy, he didn’t want to leave, and he didn’t know me, and he wasn’t handsome anymore, with all the fire drained out of his cheeks and all the strength gone from his limbs. He’d been like a fish, pale and cold and listless, and about as eager to escape the palace as a fish was to leave its lake.

I couldn’t even blame him, not entirely, for not recognizing me. I caught a glimpse of myself in a looking glass as I crept out through the servants’ entrance, and I wouldn’t have known my reflection except for the gray hood, my gray hood, pulled low over my much-changed face.

My hair had been burned black when I stood in a fallow field and asked the sun which way to go, when I’d come to a place with no signposts or shadows. My face was hollow as the moon I’d followed up a mountain made of glass, her waning light the only road. My eyes were gold as the hairs I’d plucked from the devil’s own beard, while he slept and I whispered riddles in his ear. More damningly, the girl who’d spoken to the sun and chased the moon and tricked the devil hadn’t been able to remember the boy’s name, not quite. Hadn’t cared, either.

I wondered sometimes if it was even that the boy’s beauty had truly been dulled by his time with her, or if the flaw was in my perception. Had some mote lodged itself in my eye when I watched those naked princes, so lately swans, dance for joy in a meadow? Had I been dazzled by the dragon’s golden cloak? Had I looked too long on the flower-queen’s daughter and blunted my appetite for any other sight?

One thing I was certain of was that the girl in the mirror had startled me out of care. I hadn’t seen the peacock in the moon-blanched courtyard until it was too late to hide, too late to go back, too late to pretend I was anything but what I was, for all that I was leaving the palace empty-handed. He’d been weeping, that part was true, and I had felt sorry for him, but mostly I’d wanted him to be quiet instead of raising the alarm, close as we were to the queen’s chambers. If the bird had cried out then and there, neither cleverness nor quickness would have saved me. His desires had blinded him to duty, though, and her faithless guard had been only too ready to meet me at the edge of her estates the next day, when the sun blazed brightest and his mistress often slumbered.

“He shed diamond tears, because the hens wouldn’t love him,” I told her, stroking her milk-white neck. Her flesh shifted under the fabric, the first rumblings of an avalanche, and I did it again to tease her. “Who wouldn’t have taken pity on him?”

“If you hold your tongue now, I’ll come back when your mistress sleeps and gild your tail, and they’ll follow you and sigh after you and eat their hearts over you,” I’d promised. I had known what to do for him, poor bone-white thing that he’d been, for the same reasons I’d turned away from my handsome young man gone wan and bloodless. She could bleed the color from their coats more easily than their wants; the hens wouldn’t have him as she’d made him.

“I strung his tears on a golden thread, and I braided them into my hair for safe-keeping, and then I took out my pigments and my combs and set about making him as beautiful as a blooming rose.” Her eyes glittered like those diamonds when she turned to look at me, kissing my hand now, her tongue cold and burning against my skin. I let myself smile to look upon her, so beautiful and so ruthless. “And then you came, so softly I didn’t hear you, over the meadow. What did you think when you spotted me?”

“That I wanted to speak to you more than anything,” she purred, her breath coming in soft pale gusts. “That no one had ever fled from me before.”

I’d run, doe-swift and barefoot, the moment I’d realized she was there.

“I was afraid,” I said, smiling. “I was trespassing. I thought you’d be unhappy.”

I hadn’t been afraid at all, which was strange and even more foolish than tears shed over a boy who’d smiled and held a door once or twice and met my eyes from across the hall when he was trying to find one of my companions. I’d been caught out, though, discovered, where I’d slipped so many snares before, and I’d wondered if the earth could swallow me up and spare me the humiliation of being taken for a thief. To have done so much and come so close only to make such a mistake had seemed unbearable to me, and my pride had rebelled at faltering so close to the end.

“But you came back,” she reminded me. “The next day, and the day after that.”

“I hadn’t finished,” I said. “The next day I found him weeping agates because the hens looked on him but still didn’t love him. I strung them on a copper thread and hung them from my neck, and I painted his tail to rival a sunset. I was almost done, when you found us again.”

“I had hoped you would be there.” Her eyes shimmered like the aurora when she looked at me.

“I was in agonies at the thought of coming back, but I’d promised.” I had, at that: promised to make him beautiful if only he remained silent that night. He’d kept his part of the bargain, and so I’d been bound to keep mine, no matter how dear the trade became or how I cursed myself for making it. “The last time, he wept sapphires, because of what he would be but wasn’t yet, and I strung them on a silver thread and hung them from my belt. I painted his tail with the glitter of sunlight on waves.”

The last time, when I’d run, the grass had turned slick and icy under my feet, and I’d fallen, and I’d finally been afraid. She’d offered her hand, and helped me up, and taken me inside. I had pretended not to see when she lifted her long pale fingers to her lips and sucked the blood of my scraped palms from them, staining those lips red as a ruby. She had pulled the diamonds from my hair, and the agates from my throat, and the sapphires from my waist, and I had kissed her ruby lips and seared my tongue on her pale skin and followed her to her cold bed.

“I was so pleased when you stayed with me,” she said, curling toward me, melting. “I dreamed all that night of you running, so quick even the north wind couldn’t catch you, and not slowing no matter how I called to you.”

I’d thought all that night of running. I’d told myself to be wise, to go home, to be changed but still a girl. Instead I’d watched the moonlight trace paths over her skin and followed them up her mountains and down her valleys and found purchase on the glass, and I’d made my eyes silver with her hair and turned my lips white and chattering with her mouth. In the morning, when I might have asked the sun which way to go, I saw the frost-rime on her coverlet turn to green fern coils, and her cheeks pink as a primrose, and her hair burnished like live coals, and I stayed.

But I was not so foolish as to tell the truth, when she would sometimes ask, later, now, “Do you remember the first time we met?”