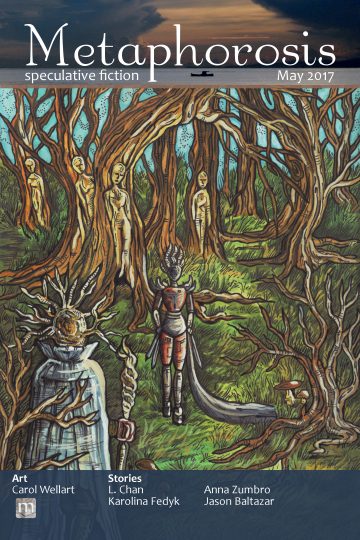 Marshall’s innocent. There’s been looting and worse everywhere since the missiles hit, but he’s taken nothing except a jacket he found in an abandoned car. It’s not honor that keeps him from stealing, he’s just scared he’ll screw it up, and then what will Dad say? The man breathed anger even before the day the sky burst into flames, the day Mom didn’t come home.

Dad doesn’t yell any more, but Marshall knows the anger is still there, rock that once was magma. When Dad commands him to keep watch, he doesn’t argue. Waiting outside the shop while Dad hunts for something edible, Marshall scans the horizon for signs of the soldiers who now play cop, judge, and executioner to anyone suspected of breaking the law.

From inside comes a woman’s voice, soft, then loud, then silent. Marshall ignores it. Probably just another looter.

Two soldiers stop them twenty minutes later, a man and a woman in grubby camouflage. The man pats them down and finds the cans of tuna and beans tucked inside Marshall’s jacket. The woman points to blood on Dad’s sleeve, and the soldiers exchange a look — a verdict.

Marshall starts crying, even though he hasn’t cried in years. He’s fourteen but says he’s twelve. He steps away from his father and says he doesn’t know this man, he was forced to come along.

“You little fuck,” Dad says. “I bet you’re the reason we got caught.”

The soldiers are as young as Joy is, maybe younger. The male soldier has barely any hair on his chin even though there’s no way anyone’s shaving now, not with the water shortages and the poison in the air that makes your fingers tremble. Maybe he’s never even been with a woman. Certainly not with the woman soldier. She looks like she could be his sister, and she looks angry.

“Please,” Joy says, putting one foot forward in that way that makes her hips jut out. They jut out more now that there’s less flesh between skin and bone. How can it be a crime to steal when starving?

“Following orders,” the boy soldier says. “You broke the law.”

“We can work something out, can’t we?”

Joy glances at the woman soldier, extending the invitation to both of them. She unzips the front of her jacket, then unbuttons her shirt to reveal the bare curves of her breasts. She runs a hand through her hair. When she pulls her fingers away several strands come away too, strange and fine and faded.

“Oh, shit.” She doesn’t take her eyes off the locks of hair as the soldiers raise their rifles.

Tulio’s hair is falling out. There’s just a bit left at the nape of his neck and above his left ear. His teeth are falling out, too. It takes more energy than he’s got to move ten feet. Others say there’s a camp two miles away and a working hospital maybe three miles past that. But what’s the point? Even if he could be saved, he has no one left. His son is gone.

So when he sees the two soldiers, the man and woman both so ragged and dirty-faced they hardly look human, he takes his chance. He runs up to them, poised to attack. The woman swings her rifle. It hits him square in the forehead.

The survivors in the camp call him Loco, and they want him gone. They approach the pair as soon they spot the uniforms, saying the old man’s a menace, or maybe he’s a young man, but it’s all the same now and anyway he doesn’t talk, just bites like a rabid dog.

“If there’s such a thing as zombies,” one woman says, “then this guy’s a zombie. You’ll be doing him a favor.”

Loco runs around flapping his arms. He won’t stay in one place long enough for either soldier to shoot him. The man wants to give up.

But he stops, because the places where Loco belongs are gone now, and Loco is almost gone too. There’s nothing else to do.

At last Loco bends over a dead crow, its wings powdered white with ash. The woman raises her rifle and centers the back of Loco’s head. He won’t see it coming.

“Told you it was a bad idea to come here,” Naomi tells her brother. She touches the name on her uniform, Barton. Her last name is Williams.

“It’s your fault,” Brett says. He kicks his camouflage jacket, which lies on the ground. “The uniforms were your idea.”

“We did what people expected from us. We kept the peace. We weren’t common looters.”

“Shut up.” The lieutenant’s uniform is almost clean and his eyes shine with authority. “I don’t care what soldier-killers have to say. You’ve wasted enough oxygen.”

“We didn’t kill the soldiers,” Brett says. “We found their bodies, already dead, and we needed clothes.”

“Guns and uniforms, you mean. So you betrayed people’s trust, shot a few looters while you were at it? What gave you the right?”

Naomi swallows, knowing her next words will be her last. “Who says you get to be the only ones enforcing the law? Maybe we weren’t official, but we were no diff—”

At the sound of the two gunshots, a murder of crows takes to the sky above the makeshift camp. There are only five, but the survivors agree it is amazing there are any birds left.