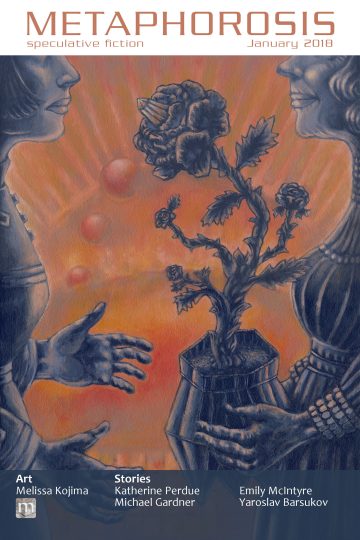 It is dawn in the half-world of Varuzza, and the sun strikes the woman’s face in strips of meat red and blue. Around her still-trim waist she wears a leather belt holstering the latest shiny aggro-tech; old lace kisses pearls around her neck and in her hand is a pot holding the tender sprig of a rose with deep purple thorns and a bud the color of midnight on the old Home World. Two days ago, she left the technological nightmare of Greatcity behind and turned the nose of her hovercraft north, toward a backwater of the universe. The rose fills the cab with a young, piney poison but she no longer notices; until the moment she relinquishes it she is impervious.

Years as a high-paid whore in the faraway Wilder West world taught her to seize her joy where she found it; a lifetime of governmental intrigue confirmed joy is an illusion. Still, she feels a choke of emotion when she sees the curving dome of her daughter’s holdfast clinging to blasted earth with the same kind of tenacity with which she herself has clung to vestiges of freedom gathered through the years in dribs and drabs of pilfered data.

Like any stranger, she waits in a generic room after the vac-lock. Remnants of her beauty veil her still, but they are drawn taut, like the pale skin on her cheekbones. Waiting, hardly a breath stirs her. Seven years of searching and a lifetime of regret culminate in this moment, in the hiss of the door as a small woman enters with a line of half-hostile puzzlement creasing between her winglike brows and a dowdy turquoise tunic straining over her belly. The traveler stands and extends the rose sprig; automatically the other woman takes it and the fingers of her right hand close against its stem; the left cup its pot. The single black bud glows against the synthetic fabric covering her breasts. The two women stand like that for long breaths, waiting for a script that does not exist. Finally, the traveler says, “You know who I am.” It sounds like a statement, but her voice carries bald hope.

In answer there is only silence. The rose between them is a banner of failure. Infinite potential ignored for too long; the rose-magic heritage that should be passed in whispers and rituals between the generations instead handed over like a reluctant hostage at the end. The daughter looks down at the rose. Her hair is parted in a meandering line and has not been washed recently. The long pause causes the older woman to stir on her feet, to cock her head so that one dangling russet jewel brushes her shoulder.

“I learned you married an itinerant,” she says, her prejudice coloring her voice and bringing an angry flush to the other woman’s cheek. An itinerant, scum, a meandering prophet with nothing to his name but this desolate holding far away from everything that matters, on the harshest inhabited planet in the multiverse.

The younger woman’s eyes narrow along her fine cheekbones—familiar cheekbones. The rose twitches with her tightened grasp, sends eddies of its rich perfume through the room. “Why do you care?” The perfume makes the traveler dizzy, now that she is not the rose’s mistress and is susceptible to its power. She struggles to find coherence. Fear chokes her more surely than any over-zealous client ever has.

I care, she thinks to say, because my daughter deserves better. I care, she almost answers, because he will leave you broken and alone and you will regret your life like I regret mine. You can never count on men. But she says only, “Because I cannot help it.” She lost the right to care the same day she delivered a mewling girl to the harsh world in a rush of blood and forgetfulness. The day she rose from her bed and disappeared to start her life over on another planet—the day she broke the chain of magic that extended hundreds of years back through the women of her line. She can feel the bitterness twisting her once-famed lips.

At least let her leave well. She steps toward her daughter. “You know what the rose is?” She almost thinks the rose listens, that its poisonous thorns tremble a little at the thought of leaving her. That the Jewel/Gem yearns for its former caretaker; but that is foolish. Magical/chemical or not, a rose is just a plant, not a friend. Not a friend, just a poison so subtle it is imbued with the very desires of its keeper and so old it is undetectable by all modern poison-sniffers.

Her daughter opens her mouth to answer and thinks better of it. She swallows her words, tucks her nail-bitten fingers together around the slick belly of the flower pot. It is clear she knows exactly what she holds; maybe her blood sparks with recognition the way the traveler’s did the day her mother died and left her holding the pot. Maybe she has heard the rumors; when you hold the plant the Emperor would trade his planet for, you don’t need to say much. When you hold a magic so potent a single drop can change history, you can straighten your back a little. You have, you might think, a way out. A second chance. A fallback.

A child cries, closer now. The younger woman shivers as if waking from a dream, but before she can turn to leave, the traveler reaches out one hand and traces the sweet curve of her daughter’s cheek for the second time in her life. The cheek is not so soft as it was in the moment of birth and forgetting, but it is still softer than anything the traveler has felt before. As her hand falls it catches, too familiar, on the spiky edges of Jewel/Gem and she leaves a pendant drop of blood there, cradled against one of the dark thorns which have never pricked her before. Perhaps it was intentional. Once she held her daughter’s fate in her hands; now the roles are reversed.

Even after she leaves, she feels the softness lingering on her fingers for hours, like the familiar scent of Jewel/Gem poison now growing and filling her lungs. Her breathing grows thick—the tendons stand out on her long neck with the effort of it. This is, it seems, her daughter’s wish; Jewel/Gem is merely an extension of its caretaker’s will. She accepts the knowledge and the poison. It is her time.

She is a legend on six planets within her lifetime. All forgotten now; forgotten except the softness of her daughter’s cheek on the tips of her fingers. Joy is hard to recognize—she’s had so little practice—but perhaps it is joy that fills her when she points her hovercraft into oblivion and lowers the sunshield. Perhaps it is joy she feels in the sacred moment before her skin chars and the pearls melt into her neck. That, or a commonplace kind of redemption.