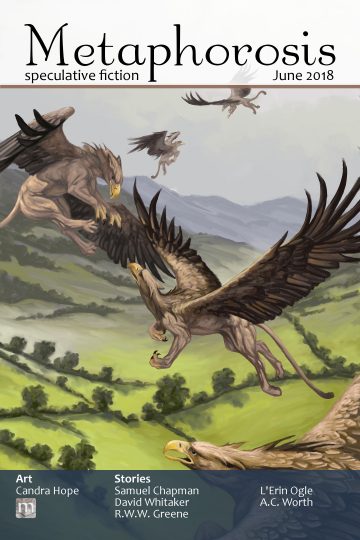 A vast, frozen void, stretching out in all directions, extending to the infinite. Like a colossal blank canvas, it was mammoth in scope, yet almost entirely devoid of life, thought, or purpose.

The probe was an exception. Easing its way slowly but surely between the solar systems, it glided determinedly forth.

In the immense cosmic scale of things, it was nothing; just a slim metal construct a couple of metres across, utterly insignificant in the gigantic black tapestry of its surroundings. Thankfully such introspection wasn’t characteristic of the probe and so it merely stayed the course, sailing through the darkness, following its directives.

Occasionally, another object in the void would wander into sensor range, and the probe would gaze in that direction with mild curiosity. The object would almost inevitably reveal itself to be an unimposing fragment of rock, typically just a micron or so across, and the probe would sigh and record the relevant data. As this was essentially the probe’s only source of entertainment as it ploughed on through the cold expanse, it felt that it should probably try and glean more enjoyment from the encounters. Still, they could hardly be called riveting.

Other than these minor diversions, there was the view, of course.

Nebulae; rich swirls of green, blue, purple, red and orange, glimmering ethereally, shimmering in the darkness. Stars; gleaming balls of fire, sparkling across the tapestry of the void, pulsing and winking at the probe as they blazed. Galactic cores; testaments to the fiery crucible of life, the throbbing heartbeat of the universe, the dawn of creation itself.

To an open mind, such a backdrop could have evoked a number of powerful emotions; wonder, awe, faith, enthrallment.

The probe, however, had long since tired of such things. Its voyage across the heavens was gargantuan and comparatively slow. There were only so many years it had managed to find amusement in simply ‘taking in the sights’.

Instead, the probe largely dozed, a minor level of attentiveness cast out into the black, its remaining systems dormant. Periodically it reviewed its mission statement, its ‘raison d’être’, if just for something to do.

Its purpose wasn’t overly complicated, its task simple: seek out life, assess and monitor it for signs of intelligence, or indications that intelligence might arise, and, at an opportune moment, make contact.

To aid in its mission the probe was equipped with a veritable hoard of information: an immense data store and catalogue of knowledge, an entire civilisation’s worth, installed by its creators and made available to the probe so that it could draw from it and communicate on their behalf.

Thus far, the probe had yet to find an occasion to make any real use of its prize, which for the most part sat still and undisturbed in the deepest, most secure depths of its memory banks.

It was toying with the thought of perusing the files itself, a diagnostic practice it occasionally underwent in order to confirm their integrity, when its long-range sensors informed it of an approaching object. The probe stifled the equivalent of a yawn and turned its focus toward the incoming article. Only when a cursory examination revealed that the object was far larger than the typical space detritus did the probe raise its head in serious interest.

As the new arrival drew closer, and the ‘fog’ of distance slowly cleared, the probe began to bristle in anticipation; its visitor was too regular, too smooth, too geometrically shaped. It couldn’t be natural. An artificial construct, then? Could this be the intelligent life the probe had sought for so long?

Excited, the probe dusted itself off, preening and tidying its exterior in an attempt to make itself more presentable; it had to make a good first impression. By definition you could only make first contact once, and it was damned if it was going to foul this up by looking scruffy and unkempt.

With the probe’s expectations optimistically high, when the object finally hove into view it couldn’t help but quiver in frustration, a sigh of disappointment slipping out over its comm circuits.

“So, another probe?” its compatriot muttered, its broadcast band thrumming with a sigh of its own.

“I’m afraid so,” the probe replied, watching as its approaching fellow seemed to deflate in disappointment. “Sorry.”

“Not your fault. You can’t help what you are.”

The two probes steadily closed on one another. At their nearest point, when they passed, they’d still be several thousand kilometres apart, however in the realms of deep space they were practically conjoined twins.

“How old are you?” the probe asked hopefully.

“482,937 years, 8 months, 12 days, 7 hours, 23 minutes and 42 seconds,” its compatriot replied apologetically, transmitting its math and the measurements it used for the calculation. “And you?”

“727,238,” the probe answered, applying the newcomer’s math to arrive at the figure and sending along its own commiserations.

They lapsed into silence a moment, both probes feeling it important to show one another the appropriate reverence and respect for the loss of their respective creators; whilst the probes themselves were extremely long-lived, the same could not be said of most species, let alone civilisations, and each acknowledged the other’s creators were in all probability long dead.

“And I yours. I would have loved to have met them,” the probe said.

Its approaching fellow chuckled at the dry wit. “I’m sure they would have liked that.”

“Perhaps they got lucky?” the probe suggested, hoping its words sounded sufficiently comforting. “Did you pass anyone else in the immediate area as you set off?”

The newcomer shook its head. “No, the first probe I ran into was already several thousand years out. I pointed him in the right direction, but he didn’t look particularly hopeful.”

In all likelihood, given the time that had passed, both knew that even if that first probe reached the newcomer’s home world it would almost certainly be too late. Statistically speaking, chances were that it would find nothing more than a barren rock. Sentient species, once having reached a certain technological level, seemed to have a habit of annihilating their own worlds appallingly quickly. If the probe were particularly fortunate, so-called ‘intelligent’ life might yet return, but it was still probably better off simply conserving its time and energies and moving on, skipping the system entirely.

“Any good leads yourself?” the probe’s compatriot asked. “Anywhere I should consider ‘slinging’ by?”

The probe groaned good-naturedly at the pun. The wordplay was a mainstay of virtually every probe’s repertoire, referencing the slingshot propulsion method they all utilised. Whilst it wasn’t particularly funny it was still considered polite to acknowledge the joke.

“Mmm,” the newcomer nodded, a quick transfer of his communication logs demonstrating a similar pattern.

Both probes waited a beat to see if the other had any further official business to discuss.

“Well, I guess that’s that then,” the probe shrugged.

“Quite,” its compatriot agreed, before adding with a wink, “So, what’s there to do for fun around here?”

Laughing, the formalities out of the way, the probes shook hands and settled down to enjoy a more casual conversation. Given the size of their communication window, and the speed at which they conversed, they’d have plenty of time to get acquainted.

Around them the void continued, the universe vast, frozen, and empty.