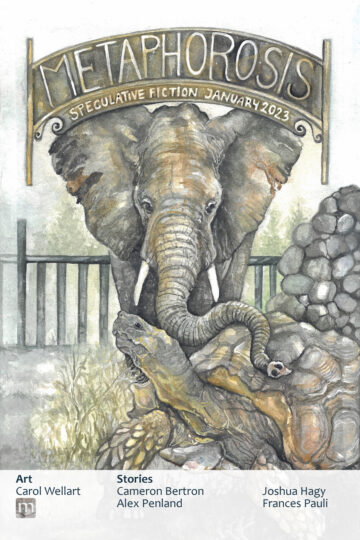 The statue was nothing like Enefai remembered. Before, it had been buried to its stomach, with both hands reaching forward to rest almost perfectly, palms up, on the hungry earth. Age had softened the statue’s face, which crawled with orange lichen, to a shroud. Its open mouth was turned up to the sky and overflowing with dust. Enefai had watched, for a long time, as the wind spilled grit from the corner of its lips like an hourglass. Now, suspended in holographic color in the center of the council chamber, it looked sanitized and frail. Enefai appraised it for the last time, knowing the outcome before the first votes flickered in. The piece was not particularly innovative; it was not of historic value. It was not vital, it was only beautiful. It would be left behind.

Enefai fixed her eyes on the statue as she cast her vote against it. No councilor volunteered to speak on the piece, so the judgement was swift. The holograph blinked and was replaced by a new sculpture, but the previous image stayed on in Enefai’s mind. The decisions were getting harder. At its start, the council had been a mess of overdrawn debates and personal attacks. But Enefai would rather deal with the chaos of those early days than the current, brutal pace of their decisions. It had taken several years, but time had run out for ego and guilt. Enefai was reminded every moment, by the defeated silence of the council and the packing crates in her own home, that the world was ending this year.

The news had broken slowly, then all at once. Before the first dispatch shuddered their calm, Enefai’s partner Moore had read the signs in the planet around her. For months, she had come home from the fields with her mouth twisted to one side, calloused fingers thrumming against her leg. She had tried to explain to Enefai about the sourness in the soil and the odd patterns of the rain. Enefai understood little beyond the alarm in her voice, but they both dared to hope that the change was peculiar to their region. It was not. The planet Kenlanli’s terraformation was reversing. It had happened on a string of other planets. Now the societies of Kenlanli, so recently settled, were packing back up into the finite space of stations to await the terraformation of a new home planet.

Moore had volunteered immediately to work in the countryside, spending long months collecting soil samples to assess the rate of decay and assisting frontier families in their preparations to leave. The crisis had unwrapped something in her. She swung into action as though she had been preparing for it her whole life. Enefai had done her duty as well, accepting the summons to serve on the council for cultural preservation. She had also received requests for consent to send in her own collection for consideration. She left the requests to collect dust, with everything else in her studio.

Another sculpture was on display. Its superb craftsmanship was doomed by the choice of material. Marble was shipped in from off planet, and the piece would be judged insufficiently Kenlanliin. Enefai hoped that it would be taken in by another planet or station. In the far future, perhaps it could find its way back to Kenlanli’s people wherever they might be. It was one of the few thoughts that still offered consolation.

The marble statue was the last of the day. When the session closed, Enefai brushed her way out of the chamber and through the honeycomb halls, exchanging a few nods and sympathetic words with her fellow councilors. Everyone’s voice was low, their exchanges quick but sincere. They also had homes to pack. Enefai stepped outside to a sky bruised with evening and stretched her legs as she waded through the city’s shallow outskirts into the countryside. The long path home took her past one of her own sculptures. She did not slow as she passed.

She had carved it the same year that she met Moore. As they rattled through the countryside in the back of a transport vehicle, Enefai had felt something tipping over inside her the longer she spoke with this sprawling woman in muddied boots. Probably it was the apocalypse playing tricks on her, but all the memories from that time felt warm. Enefai missed the weightless quiet between them. She missed the long evenings in her studio they spent tinkering at her worktable, Enefai with her designs and Moore with her tools or sketches. These days, the ice cracked beneath their every conversation. When Moore was not working in the countryside, she was brimming with hard choices. Enefai dodged conversations about the space station. She wanted to preserve at least the bubble of their home from the world outside as it ransacked itself. But Moore kept opening the door.

In her head, Moore was already living on the station. Sometimes, it even seemed to Enefai that she was excited about it. Moore planned ceaselessly, scrambling to assure Enefai that they would have everything they needed. But it wasn’t their future that weighed heaviest on Enefai, even as it seemed to consume Moore, it was their life on Kenlanli. It was the slide of sand under her boots and the way that sunrise tangled in Moore’s hair. In her birth province, at midday the desert’s horizon disappeared with a shiver into the pale sky. How to forget that? How to remember?

Her back was slick with sweat when she saw the welcoming round roof of their home. As she stepped inside, the peace earned from her evening walk was dissipated by the boxes crowding the floor. Moore was out for the week, but due back any day. She had left Enefai a list of requests to help with the packing process. Enefai did not need to look at it. Everything was done except one item. She needed to pack her studio.

She quickly ate dinner and prepared a cup of tea. She kept herself moving, knowing that if she paused in her momentum, she would not do any packing tonight. Mechanically, she entered the studio and evaluated the single crate reserved for her belongings against the gentle mess of her studio. The floor and work benches were cluttered with models, sketches, and photos. Only her tools stood in perfect order, hanging on the walls and from the ceiling. The darkness outside converted the studio’s large windows to mirrors and Enefai kept catching sight of her own movement as she worked. She tried to summon nostalgia as she packed, but her memories felt glossy and distant. Each tool slid into the crate only left her feeling heavier.

By the time she stopped for a break, her studio was decimated and her tea was cold. Enefai sat down heavily on the floor, her legs splayed in front of her and her back against a slab. Its porous rasp felt reassuring on the back of her arms. Years ago, she had brought the stone from her home province for a design she planned. The rock was unique to her home, stark white and ribboned with pale orange and crimson. As a kid, she used to find patterns in the traces of color, pulling shapes out of the cliffsides. She wondered bitterly what abstractions she would be able to find in the expressionless plaster they would use on station.

She slid away from the stone and regarded it from her place on the floor. She had seen more statues in the last few years than in all her life. She imagined their shapes in the slab and marveled at what had been accomplished with a piece of rock, a set of tools. But it hadn’t saved them, extinguished in a flash of holographic light. With time, their craftsmanship, her craftsmanship, would be weathered back to featureless slabs like the one which stood before her. She felt powerless against that future, against her unreasoning anger at Moore’s resilience, against her love for Kenlanli. She felt small beneath the slab that stretched above her. Hardening her gaze, she stared into the stone to calm her mind and began to slowly trace the fiery streaks in the rock from top to bottom.

She remembered the design she had planned for this slab when she picked it all those years ago. She could see now that it was all wrong. The arch of a spine was already in the slab’s contour, thinly submerged. Veins of color netted together in the side. They would run over an open palm like sunlight. She could only catch the shape in pieces, barely coherent, but it was enough. The night hours were re-aligning. The studio’s gravity bent around the work. Moore’s expression when she inspected her crops, when she lifted a long shoot with the tip of her thumb, was already in the stone. Enefai reached for it. She smoothed the memorized lips and rounded the jaw. She crinkled the eyes that would watch, unflinching, as their planet’s atmosphere slumped to reclaim the horizon. She followed only that instinct which had first searched out shapes in the mountainsides. She followed it until the sunrise dripped dirty pink into her studio.

When it was done, she would face it towards the window, pack her tools away, and leave this room forever. But for now, she closed her grainy eyes and pressed her forehead against the statue’s unhewn base. Through her headphones she could not hear Moor’s clattering entrance. The world was quiet as arms encircled her. Quiet as a kiss was buried on her neck. She would take it to the stars.