B. Morris Allen grew up in a house full of books that traveled the world. Nowadays, they’re e-books, and lighter to carry, but they’re still multiplying. He’s been a biochemist, an activist, and a lawyer, and now works as a foreign aid consultant. When he’s not roaming foreign countries fighting corruption, he’s on the Oregon coast, chatting with seals. In the occasional free moment, he edits Metaphorosis magazine, and works on his own speculative stories of love and disaster.

B. Morris Allen’s story “Adaptations to Coastal Erosion” was published in Metaphorosis on Friday, 24 June 2016. Subscribe to our e-mail updates so you’ll know when new stories go live. 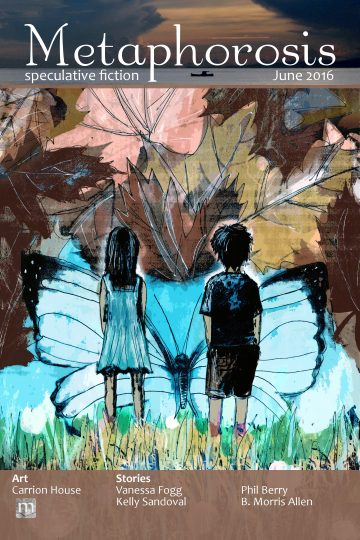 Litiva noodles with a brown sauce

Litiva noodles are a common food on Zubelgenubel 7. In fact, they’re the mainstay of the local diet. It’s no wonder – when I visited, I found myself tripping over them – literally. The Litiva is not so much a noodle as a root – they grow like weeds from the widespread Liva trees, and form mats so thick that I’m not actually sure what’s underneath. Maybe the Zubies are right when they say it’s noodles all the way down.Litiva noodles can be eaten raw – you’ll often see Zubie infants with a bare root in each mouth, and in fact parents create complex mazes to keep their kids active during the day – just lay the noodle, stick one end in a mouth, and the child crawls after it all day long, ideally ending up at the front door right at naptime. The noodles are good raw, but a little astringent for the human throat. A better way is to take a long root – pinkie-thick is ideal, chop it into one or two-meter segments, and lay them on a bed of coal overnight. In the morning, gather some of your hut’s roof-crud (actually an algae that respires CO2), mix it with a little brown sugar, and heat it with some water (your hut will likely have a drip tube under the bed). Cook that over the coals in a cauldron until the sugar is dissolved, and drop in the noodles. Exactly three minutes, and you’ll have a delicious breakfast for thirty. It’s said to taste just like Peruvian cloud-glass, but I find it’s more like lightly toasted glivnarth, with notes of musk-melon and maple.
from the kitchen of B. Morris Allen

A day with the drillworms

I met Skazit the day I landed. Khamun IV is a hard planet, all gorges and boulders and sharp crystal surfaces. It’s dark, too, when the rings are angled just right in winter. I was young then; I landed in the dark zone anyway. I lost track of the ship right away. The duraline sliced in half on a crystal, and the locator beacon reflected off so many surfaces it might as well have been off. I stayed calm, though. I had a full tank of air, and all I had to do was backtrack. Think and backtrack. Take my time. If it hadn’t been for the drillworms, I’d have been fine.

We still don’t know much about the drillworms. They only come out in the dark, and they tunnel straight up through whatever’s in their way. We’re not sure what happens when they reach the air, but evidence suggests they explode. That’s what the feet of my lander suggest, anyway. Maybe that’s how the worms reproduce.

Anyway, there I was, lost in the dark, surrounded by edges, and only half a k from my lander. I’d have been able to see it if I could climb onto one of the boulders. I picked the one that looked the least sharp, and I’d put one foot into a handy notch when I felt a buzz at the sole of my other boot. I’d like to say it tickled, but truth is, it scared the heck out of me. Instinct took over, and I pushed down on the upper foot. I kicked pretty hard, I guess; I launched up in the air to the top of that boulder. I got a glimpse of my lander off to the right. Down below, where I’d been standing, something jagged and black was just poking through the surface. I windmilled for all I was worth, trying to swim through that thin atmosphere to the top of the boulder – only it wasn’t there anymore. What I’d taken for a rough sphere was now a broad cup of dark obsidian. I hit hard, and that transparent stone just folded over me as I gasped for breath. We rolled like a pinball, dancing around boulders and chasms in a rough line toward my lander. I got banged around plenty, but could see it, every revolution when my head came up top, if it happened to face that way. There were little bursts of bright orange light every now and then, and then a light tinkle. I guess that was the drillworms exploding; at the time, it looked like blaster fire. When we got to the lander, I didn’t even have to get out – the obsidian just shaped itself into a long tube that went straight up to the hatch, and spit me into the airlock. I landed on my feet and threw the hatch shut behind me. I lay there for the next hour, just shivering, except for one time, when I thought I felt something vibrate under me. Turned out it was just a kinked compressor tube.

I don’t know her name’s really Skazit; that’s just what I call her. I don’t know she’s female, either; that’s just a label. She saved my life, though. I go out there, sometimes, in the summer. Maybe late spring, early fall. Never winter. There’s a big boulder out there, about where I landed. I sit there by it and tell her how I’m doing. I bring presents sometimes. A Malatherian root-crystal, a chunk of spaflerite, maybe a shear of high-pressure axonot. They vanish. I like to think she takes them. Once, I thought I could see a crust of amethyst, deep inside the obsidian. Maybe it was just the sun.

I have a little dome now, here at the pole. We’ve got the orbital mirror to keep the lights on all the time. Not a lot of people come. It’s a beautiful place, though, if you know how to see it.

from the notebooks of B. Morris Allen

Friff leaves are best eaten fresh. That poses difficulties, since the friff maxillae only develop at high altitudes. Terminology can be confusing here – maxillae are actually modified pairs of branches that are loosely attached to the thick mainstem and crash together in high winds. The sound is said to resemble teeth chattering.

What you’ll most often find on the market is ‘fresh-harvested’ leaves. Don’t be taken in! These are simply leaves gathered from the canyon floor after the morning cyclone. They are not truly ‘fresh’. During the long fall from the clag spires, the leaves undergo atmospheric compression, and much of the subtlest juice is squeezed out. Next time you see these ‘fresh-harvested’ leaves for sale, check to see if they’re moist. If they are, a good half of the juice is likely gone. The long fall to the canyon floor also drains the leaves of most of the volatile compounds that give good leaves their distinctive smell. Ask the vendor to let you smell the leaves. If he does, they’re not fresh, and your vendor is a mountebank. No reputable vendor would risk their product that way.

Once you’ve secured fresh friff leaves (see management for a list of reliable vendors), suitably stored in individual pressure-containment vessels, lock your doors. Clear your evening calendar. Send your loved ones off to a spa. Friff eating is a uniquely solitary experience. More to the point, you’ll be out of commission for at least several hours, and you won’t want to be disturbed.

Occasional friff eaters can rent a consumption chamber (see management for recommendations). A serious friff eatery will provide a clean, private room, a sterile eating suit, and a new pair of silicon tongs. These are recommended to avoid injury. For those who can afford it, or who expect to eat friff on a regular basis, we strongly recommend the B&TR Infuser – the XB2 is the latest.

The key to friff eating is simple – get the leaf from its containment chamber and into your mouth as quickly and completely as possible. Truly fresh friff juices are absolutely toxic until neutralized by saliva. Only 7% of trained friff eaters die every year, though dental injuries are common – thus the silicon tongs. The Infuser, of course, simplifies the problem by sucking up the leaf through a macerating fan, and shooting it directly into your mouth through a wide tube. Once you’ve used the Infuser, you won’t go back to tongs – though it may take a full day to return to consciousness.

Those who’ve eaten fresh friff (and we have) say there’s nothing to compare with the taste of pure joy dancing along your taste buds and down your nerves to the gala in your spine. It’s simply the best flavor there is. Plus, it cures acne.

If you can’t afford fresh leaves, we’d say don’t bother. But we try to cater to the common humanoid as well as sophisticates, so our editor insists we add this: if you must eat ‘fresh-harvested’ leaves, try them with garlic and a little zoof powder. The garlic will cover the slightly rancid taste, and the zoof will disorient you enough that you may think you’re eating the real thing. Good luck, and please don’t tell us about it.

from the kitchen of B. Morris Allen

Living with the Betel goose

The main difficulty in befriending a Betel goose is the wings. For one thing, they’re not wings at all, but molecular-bond disruption planes that flicker within an 11-dimensional space. Mostly, you don’t notice it, but every now and then the flickering collapses a local tesseract probability, and an annoying film settles over every surface for a moment. Plus, they smell like ozone, and the wings get pretty warm.No one’s ever figured out just how the gooses travel. (Say ‘geese’ and you might as well set your comm to broadcast ‘TERRAN’. Only locals can pull off the half-guttural ‘jhooses’. Don’t try.) One minute, they’re hovering motionless across the room, and the next they’re sitting on your shoulder, crisping your ear-hair. Ultra-sonic flight, some say. Teleportation, say others. Me, I think they just walk. Those three legs have to be doing something, don’t they? I think they’re just walking in another dimension, and it takes a while for ours to catch up.You’re never quite sure you’re communicating with a goose (or jhoose). You can talk to it all you want, but they never say anything. Still, one morning you’ll wake up to find your blankets are made of super-soft Rtarian plum-skin, or that your sock drawer has been organized by total thread length. Or that you have a sock drawer. Take it all in stride, and you’re in for a beautiful friendship.

No one’s really sure what the jhooses get out of it. Theodore likes to perch on top of my rear head, which is good on cool days. I asked it (it’s not clear whether they have gender) once, on our first anniversary, what I could do to make it happy, and that very night, all my pots turned into durna-fiber – completely indestructible, a great heat conductor, and I can just fold them up to put them in the drawer. I admit, I haven’t yet found the trick of getting the durna-fiber to hold its shape, so it’s a bit like cooking in a bag. That’s life with a Betel goose, though. You never quite know what’s coming next.

from the notebooks of B. Morris Allen